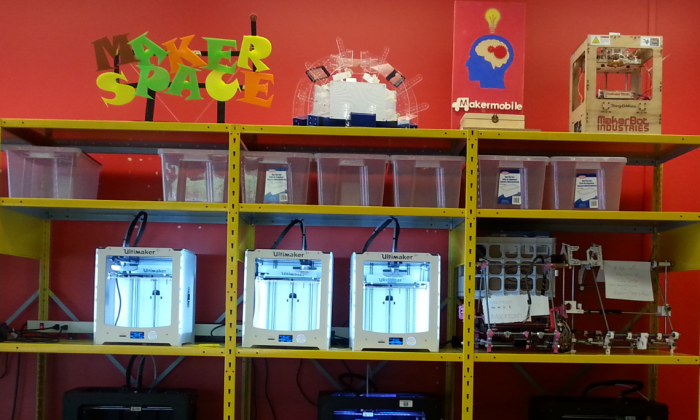 Makerspaces are like super-garages providing room to tinker, create, and build for the masses. The “maker movement” is in its infancy in Canada, and there is potential for boosting innovation and the economy. But for now, people mostly want to be part of a community of builders and creators—the so-called makers.

The maker movement began in the U.S. in 2005 and has risen to national attention. In 2014, the White House hosted its first “maker faire,” where people of all ages came to show what they’ve built and learned in doing so. Universities and colleges co-signed a letter to President Obama pledging to help grow the maker movement following the wishes of the White House.

“The maker movement is all about cooperation and openness, and helping each other and learning from each other,” University of Ottawa engineering professor Hanan Anis tells Epoch Times. Anis runs the university’s makerspace.

Innovation with hardware is expensive and difficult. Unlike software, which can be copied easily, hardware cannot. Manufacturing hardware requires a lot more space and specialized tools. It’s not like sitting with a laptop and programming.

Makerspaces have much bigger value to society beyond entrepreneurship.
— Hanan Anis, University of Ottawa

Like open-source software, which provides building blocks for countless applications, makerspaces provide open-source hardware. However, while programmers working remotely can develop software, hardware development requires makers to be physically working together. And that’s a good thing.

“Makers I have spoken with have expressed that people tend not to stay for the technology, but rather the community, the experience, and the ability to make—to make something useful, aesthetic, and techy, from scratch, with their own two hands,” said Meika Ellis, a doctoral law student at the University of Ottawa and makerspace researcher with Open AIR (African Innovation Research), in a blog post.

The typical makerspace gives people access to emerging technologies like 3-D printers, laser-cutters, and Arduinos, which are programmable microcontroller circuit boards. Clearly, these are not the kinds of things you find in the typical garage.

“The entrepreneur doesn’t really need to buy a million dollars of equipment. They can go to a makerspace [and] build what they want,” Anis says. “This has lowered the bar to entry in the entrepreneurial scene.”

Makerspaces provide an excellent environment for prototyping, which is critical before investing a lot of money in production. They can be the front-end of the “innovation funnel,” eventually leading to the creation of a startup or to working with an incubator for commercial success.

Innovation is a priority for the federal government, and it is keeping an eye on the maker movement. It has provided funding for specific makerspaces like Winnipeg’s non-profit AssentWorks, founded in 2011.

Given the different models for makerspaces—non-commercial, non-academic, commercial, etc.—success is measured differently, and some of the best measures are hard to quantify, like impact on the community.

In fact, makerspaces are a natural fit for schools and even the local library.

“It is actually quite a good fit,” says Jennifer Calhoun, who manages the south urban branches for the Ottawa Public Library. It has a makerspace at its Nepean Centrepointe branch called “Imagine Space.” For a public library to have makerspaces is a jump forward in thinking, anticipating what people expect in the future.

“Our philosophy is to provide a good introduction to the concept of makerspaces. We foster that sense of creativity and the desire to learn,” Calhoun says. “One of our focuses is digital literacy and this is a great way to promote that.”

Imagine Space operates as a not-for-profit and Calhoun has seen interest boom. She says the laser-cutters are always in use and they’ve certified 1,600 people in the last year on how to use it.

Anis adds that the diversity of makerspace users is impressive, with engineering students collaborating with arts students on multi-disciplinary projects.

In addition, some 20 companies have been founded from the University of Ottawa’s makerspace in the two years it’s been in operation.

Commercial success is not the sole motivation behind makerspaces, though there have been some big success stories such as the creation of prosthetic limbs.

“There is also a strong sentiment and in practice within a lot of makerspaces that it should be pre-incubation spaces, spaces where the focus is on learning and tinkering,” says Chris Armstrong, a visiting fellow from the University of Witwatersrand in South Africa and researcher with Open AIR.

“If ideas, innovations, or products emerge, then that’s fine,” he says.

Armstrong adds that some within the maker movement believe that the potential commercial applications are best kept separate and that emphasis should be on sharing and learning.

“People acknowledge that intellectual property rights can come later when you are incubating or becoming a startup,” Armstrong says. “Within the makerspace, no, it’s not about that. It’s about sharing and I think that’s quite important.”

“Those are crucial skills,” Armstrong says.

“Makerspaces have much bigger value to society beyond entrepreneurship,” Anis says.

The grassroots maker movement is picking up steam and leading to more people in society being creative, learning, and sharing. Greater innovation and economic growth could be longer-term benefits. Who knows what game-changing new product might come from tinkering in a makerspace.

“Given its potential to turn people from consumers into makers, this growing movement could be key to innovation and our future. After all, a maker is the one who holds the potential to change the world,” Ellis said.