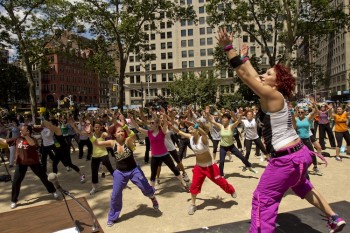 By Zachary Stieber
Print
NEW YORK—It's not every day you see dozens of people vigorously dancing in unison in Madison Square Park. Enticing visitors to watch and participate to varying degrees, the mostly female crowd worked up a sweat while engaging in a free Zumba workout class on Monday. Set to international music, Zumba requires exercisers to mimic the fast-paced, free-form dancing of an instructor.

The Zumba event kicked off a weeklong campaign called Make NYC Your Gym to raise awareness about the plethora of free and low cost fitness opportunities across every borough.

“Physical activity and exercise improves your health and quality of life. It's so much more easy and fun to do when you have other people,” said Linda Gibbs, deputy mayor of Health and Human Services at the press conference between the Zumba warm up and the actual class.

Gibbs shared that she recently organized a neighborhood volleyball game at Brooklyn Bridge Park that 40 people attended. “It was a blast: it was just really fun to have that time with our neighbors,” said Gibbs.

During the press conference, an announcement was made that all recreation centers in New York are free for the week.

Also, the city just released a redesign of the BeFitNYC website, a project three years in the making.

“We added a Facebook app so that you can share any programs you find with your Facebook friends, and if you can't find something then you can create it on Facebook. You can say, I wanna do a walk tomorrow, and invite your friends,” said Tom Hughes, director of New Media for the Parks Department.

The weeklong campaign will continue with an event in each borough throughout the week, such as the BeFitNYC Fitness Challenge in Manhattan on Wednesday 3-5 p.m., a Shape Up NYC Class at St. Johns Recreation Center on Friday 11 a.m. to noon. The events will culminate with the BeFitNYC Fitness Festival in Washington Square Park, Manhattan, on Sunday from 11 a.m. to 3 p.m., and will display some of the areas popular fitness methods, like Zumba and Intensati.

At the press conference Patrick O'Keefe, general manager for Downstate Sales for Empire BlueCross BlueShield, co-sponsor with Equinox Fitness of the initiative, emphasized that obesity is a crisis, especially for children.

“We are in the midst of a crisis of untold severity. It has a financial impact but more importantly it has a human toll, it is a crisis that can be averted, though, and I think these type of activities are the things that can help us avert this crisis,” said O’Keefe.

O’Keefe went on to say that almost 60 percent of adult and 40 percent of children are overweight, and “close to 30 percent of New Yorkers have had no type of physical activity in the last 30 days.”

“I'm looking at the instructor, and no one knows what the next move is going to be in a matter of a second or two, so everyone has to adapt so quickly to the moves, and that is totally exhausting,” said Katie O'Beirne, who was babysitting a 2-year old while swaying to the music.

“It's great,” said Althea, from Brooklyn, who stopped for a short break. “I saw a [Zumba] infomercial last night, and wanted to buy the tapes, then this morning I saw an e-mail from the Parks Department about this free class.”

Jana Flaherty, visiting from Connecticut, looked up the event online and said she was enjoying her first Zumba workout.