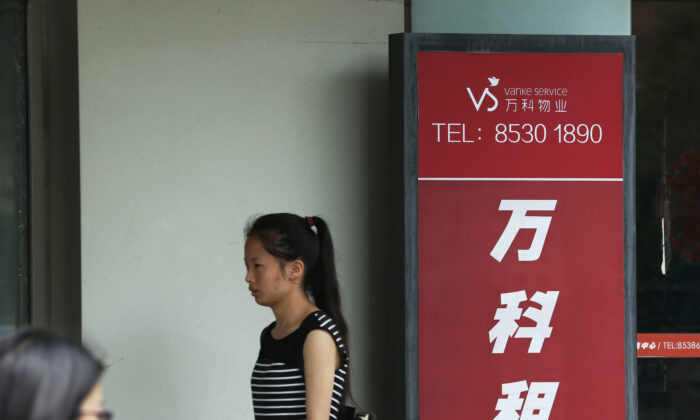 A woman walks past a Vanke Service Center in Beijing on July 6, 2016. (STR/AFP via Getty Images)
Analysis

While Vanke, a major Chinese real estate development company, set its target on fighting to survive in 2022, another real estate giant Evergrande was on the verge of a liquidity crisis. In the past years, changing policies and the “making-big” ambition of China’s Communist government have tipped the country’s real estate sector into a life-or-death situation because it is overloaded with debts.

Vanke announced that in January it had contracted sales of 35.60 billion yuan ($5.62 billion), a sharp drop of 50.2 percent from last January and the lowest ever single-month sales report, surpassing March 2020, when the Covid epidemic markedly reduced sales.

Vanke is one of the largest property developers in China with 130,000 employees, and ranked second behind Country Garden in the January-November 2021 sales performance, according to data by China Index Academy.

Speaking at an internal meeting on Feb. 9, Yu Liang, chairman of Vanke’s board of directors, said 2022 is a critical year for Vanke, and they need to fight for survival.

“[China’s] real estate bubble is not only not getting bigger, the industry is facing a general collapse,” Xie Tian, professor in business at the University of South Carolina Aiken, told The Epoch Times.

“Real estate is a pillar industry in China, if its bubble bursts, it will hurt the Chinese economy tremendously,” Xie said.

It will be a high-pressure time for China’s real estate companies as they try to repay their debts, as there is nearly $200 billion in domestic and foreign debt pending that needs to be settled during the year, Beike Research Institute estimated.

Although the causes of the real estate bubble are complex, high leverage and high debt ratios have undoubtedly been one of the most important drivers of the bubble over the past 20 years. Behind all this lies an invisible hand—the unique Chinese corporate culture, which is like an overlooked devil, hidden in the details and accompanied by greed. At its root, it is part of the Chinese Communist Party (CCP) culture.

Since the end of the last century, official media kept hyping “make the enterprise bigger and stronger.” Consequently, Vanke, Evergrande, and other real estate companies emerged from that era.

In today’s China, the leaders of CCP-owned enterprises are more willing to increase the size of their enterprises during their tenure, even if it is only through debt-fueled expansion. Since the establishment of the Communist regime in 1949, the size of enterprises has determined the political status and official rank of its leaders, and this mentality has also influenced the emergence of private enterprises since then.

As private enterprises grow and form themselves in scale, they can seize more resources from the country, and their heads are qualified to be part of the political elite, and usually occupy a seat in the Communist Party’s “vase” institutions—the National People’s Congress and the Political Consultative Conference, where the political and business elites gather. That is to say, with their businesses having grown in size, they have not only wealth but also political status, which are unattainable for ordinary people. Examples include Evergrande Chairman Xu Jiayin, Alibaba Group boss Ma Yun, and Jingdong founder Liu Qiangdong.

Hidden debt—a derivative of Chinese corporate culture—is one method of financing that is widely applied by Chinese real estate companies. Some professionals in the financial sector believe that public debt statements do not reflect the true debt situation and that the scale of hidden debt may be astonishing.

Hong Kong financial analyst Jiang Tianming told The Epoch Times that in order to broaden their financing channels, many real estate companies do not record all debts in their balance sheets. They are in the names of their joint ventures, associates, or minority shareholders.

Once debt default occurs, the outside will find that the debt on record is only the tip of the iceberg. “The Chinese credit expansion has made it easier for state-owned enterprises to obtain funds at a relatively low cost, and some private companies have also spared no effort to borrow a large amount of money to build and expand their ‘empires’ during the economic upturn in the past years,” said Jiang.

“Arrogance, opportunism, and irresponsibility are prevalent in China, and are reflected in business activities as barbaric expansion, [that is] reckless,” Jiang added.

Nowadays, sluggish Chinese real estate companies lack money more than ever, but their funding ability is not what it used to be. Data by one Chinese financial institute showed that in January 2022, the Chinese real estate sector issued a total of about $7.5 billion in bonds, a huge drop of 70 percent year-on-year, with offshore issuance accounting for only 30 percent, down 24 percent from last January.

The focus of real estate financing has shifted to short-term bond issuance within China.

“Panic is pervading and spreading in China’s real estate market, with people seeing a decline in property sales and a sharp rise in court auctioned homes, which could lead to more mortgage cuts and even abandonment of homes,” Xie said.

Vanke’s goal of “fight to survive” has become a golden phrase among the bosses of Chinese real estate companies, and the abnormal corporate culture that grows in the Chinese regime is making them pay heavily.