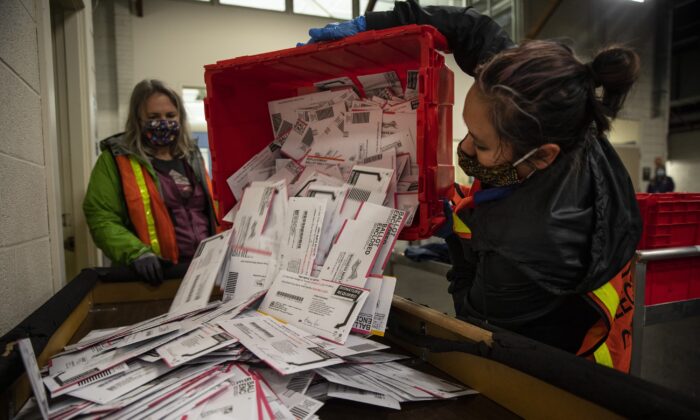 A new survey reveals that the majority of Americans do not trust the integrity of elections in the country.

“It makes me fear for our republic,” Convention of States President Mark Meckler told The Epoch Times, adding that the peaceful transference of power is only made possible by faith in the sanctity of our elections.

According to his survey, the faith level in the sanctity of America’s elections is worse for states that can’t manage to post results on the night of elections.

In March, the Foundation for Government Accountability ranked Florida as a leader in election integrity for the second year in a row, “thanks to the strong leadership of Governor Ron DeSantis and the Florida Legislature.”

Senate Bill 524 established the nation’s first Office of Election Crimes and Security within the Florida Department of State to investigate alleged occurrences of election law violations or irregularities and strengthened the previous year’s ban through Senate Bill 90, which prohibits private funding of elections with money DeSantis referred to as Zuckerbucks.”

Florida state law also requires early voting ballots to be completely counted on the day before election day. The results of vote-by-mail ballots and those from early voting must also be posted within 30 minutes of the polls closing.

According to Meckler, Florida ran a flawless election.

“They have a good election security system,” Meckler said. “They produce their results early and that gives people more confidence.”

Considering that Florida’s election was so clean, Meckler also suggested its election integrity measures “was a factor in the red wave” that swept the Sunshine State.

“The main thing is that Florida provides a model for how the rest of the country should run its elections,” he said.