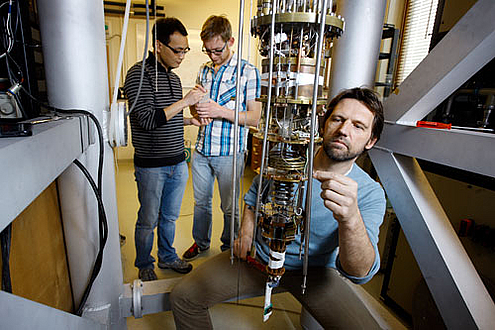 Leo Kouwenhoven and his team in the lab. (Sam Rentmeester)
Beyond Science

Majorana particles may have been detected for the first time since their theoretical existence was first proposed in the 1930s, with potential applications for quantum computing.

In 1937, Italian physicist Ettore Majorana came up with the idea of the Majorana fermion—a particle that could also act as its own anti-particle—existing between matter and anti-matter.

Dutch nanoscientists have now found compelling evidence that these neutral particles can exist inside a strong magnetic field in the tiny nanowires of an exotic superconductor device they developed.

They observed a peak signal in the magnetic field that disappeared when the conditions proposed for Majorana formation were eliminated.

“The measurements of the particle at the ends of the nanowire cannot otherwise be explained than through the presence of a pair of Majorana fermions,” said study co-author Leo Kouwenhoven at Technische Universiteit Delft in a press release.

In theory, a sensitive particle accelerator like the one at CERN could detect such a particle, but properly designed nanostructures can also be used.

“What’s magical about quantum mechanics is that a Majorana particle created in this way is similar to the ones that may be observed in a particle accelerator, although that is very difficult to comprehend,” Kouwenhoven explained.

Majorana particles could be used to build very stable quantum computers, which currently only exist in theory. They may also be significant in cosmology with the theory that they make up invisible dark matter, which is thought to form more than 90 percent of our universe.

The findings were published in Science on April 12.