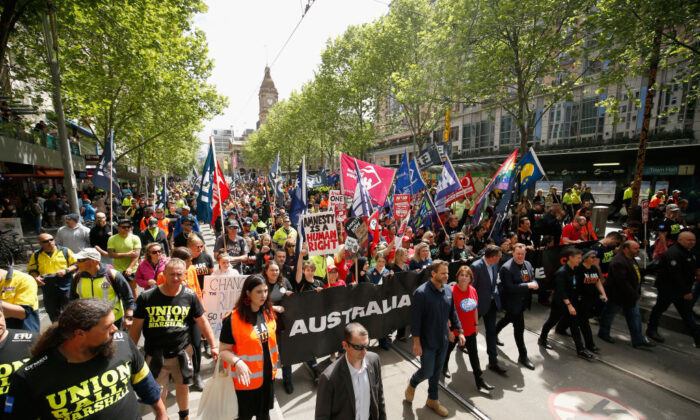 Protesters take part in a rally organised by the ACTU in Melbourne on Oct. 23, 2018. (Darrian Traynor/Getty Images)
Australia

The Australian Council of Trade Unions (ACTU) has proposed radical reforms to spur productivity in the country, including controls on energy prices and stopping impending personal tax cuts.

Yet federal Treasurer Jim Chalmers has responded, saying that while ideas were welcome, they would not necessarily be adopted at the September Jobs and Skills Summit.

The Summit is a key Albanese government policy platform—in the vein of the 1983 Hawke-Keating government Economic Summit—which aims to gather business groups, unions, political leaders, and experts together to discuss a long-term productivity plan for the country. In turn, tackling slowing real wage growth and high inflation.

In the ACTU’s policy submission to the Albanese Summit, the union proposed several initiatives, including regulating electricity and gas prices; lowering childcare fees (or even considering offering it for free); making sure wage rates stay “in line with inflation;” the implementation of an “excess profits levy” on energy companies, so they do not enjoy “windfall profits” during high inflation; and cancelling of Stage Three tax cuts set for 2024-25.

The ACTU claimed the tax cuts would only benefit “higher-income households and exacerbate income inequality and inflationary pressures,” a stance shared by the Australian Greens party.

Yet Treasurer Chalmers has played down the proposals so far, saying “the whole point of a Summit like this is to bring people together.”

“A lot of the suggestions made by the ACTU are not government policies, but it would be pretty strange if we said come along to a Summit and only bring along ideas which have been pre-approved by the government,” he told the Australian Broadcasting Corporation on Aug. 11.

“Our objective here is to bring people together to see if we can make sure that every business that needs a good well-trained, enthusiastic worker can find one, and that every worker who wants a good secure, well-paid job can get one,” he said. “Different groups will have different views about how we get there, but I think the effort to bring people together to find that common ground will pay off.”

Mundine pointed to the previous “Australia 2020 Summit” held in 2008 by former Labor Prime Minister Kevin Rudd, which had a broader purview but was also focused on shaping a future growth path for the country.

“Who remembers that? What was achieved at the 2020 Summit? We had the Tax Summit under [former Treasurer] Paul Keating. What happened there? There were some policies developed, but that was outside of the Summit,” Mundine previously told The Epoch Times.

“It just shows the lack of vision and the lack of ideas that governments have now—it doesn’t matter what party they are.”

Meanwhile, opposition leader Peter Dutton has ruled out attending the Summit calling it a “stunt with the unions.”

“[ACTU Chief] Sally McManus is no union leader from the 1980s. She’s no Bill Kelty, and certainly, [Prime Minister] Anthony Albanese is no Bob Hawke,” he told reporters on Aug. 11.

He said it was “not realistic” for a similar outcome to be reached compared to the 1983 Summit, which saw the then-Labor government and ACTU agree to the Prices and Incomes Accord.

The Accord laid out a ten-year framework, which saw fixed wage increases (with the unions agreeing to curb demands) balanced with increases in the “social wage”—increased government welfare spending. It also saw the creation of Australia’s universal healthcare service Medicare and eventually compulsory superannuation.