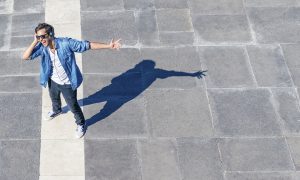 Intuition is something fuzzy and abstract, right? Science should be clear, solid, and tangible … right?

These two seemingly inimical “ways of knowing” could, nonetheless, mingle well. And Dr. William H. Kautz thinks the future of science counts on it.

Dr. Kautz received his Doctor of Science (Sc.D.) from the Massachusetts Institute of Technology (MIT) in 1951, and conducted research in computer science at Stanford Research Institute (SRI) International for 34 years, with additional work in geophysics, health, chemistry, and the social sciences. In 1977, he founded the Center for Applied Intuition, a San Francisco organization that conducts research on the nature of intuition and its application in several fields of science.

“Science is going through the birth throes now of trying to find a way to incorporate the mind without [incorporating the mind],” Dr. Kautz said, laughing at the paradox. “It’s trying to explore the subjective domain by objective means.”

Crisis in Science, Need for Change

There are many indications that the mind (subjectivity) plays an important role in material science experiments (objective events). The emergence of quantum mechanics has shown that our conscious acts of measurement have physical impacts on what is being measured. Quantum mechanics has also shown us that something is fundamentally amiss in our scientific perspective overall.

In 1999, Brian Greene wrote in his Pulitzer Prize-nominated book “The Elegant Universe”: “As they are both currently formulated, general relativity and quantum mechanics cannot both be right. The two theories underlying the tremendous progress of physics during the last hundred years—progress that has explained the expansion of the heavens and the fundamental structure of matter—are mutually incompatible.”

As scientists seek a “Theory of Everything” that could reconcile this incompatibility, Dr. Kautz is doing his part to nudge science toward what he feels could be a more holistic approach—using intuition. This could allow us to explore the subjective and nonmaterial domains by objective means.

In the 17th century, the mystics and their intuitive knowledge were sidelined by Sir Francis Bacon’s Scientific Method. Now, Dr. Kautz shows that intuition may have great advantages if added to the Scientific Method. He’s started by using intuition to find answers to some of science’s unanswered questions. Then, he’s used conventional scientific investigation to verify the knowledge gained through intuition.

In the late 1970s, Dr. Kautz gathered eight people with strong intuitive abilities. He asked them, independently, to consider how we could better predict earthquakes. These people were drawn from the general public, they were not scientists.

He compiled their consistent responses to questions about earthquake precursors into a consensus. In 2012, he revisited the consensus and wrote a paper published in the fall edition of the Journal of Scientific Exploration, titled “Earthquake Triggering: Verification of Insights Obtained by Intuitive Consensus.” He stated in the paper: “Re-examination of these intuitive findings 30 years later, in the light of the many subsequent discoveries reported in mainstream geophysics journals, revealed that the expert intuitives had provided novel, significant, and strikingly correct information on earthquake triggering and related precursors,” he wrote.

For example, the intuitives suggested a search for precursors in the upper atmosphere and ionosphere, a notion incredible to seismologists at the time. But in the 1980s the new satellites detected several such precursory events, above and shortly before major earthquakes. In recent years, researchers (including NASA scientists) have been operating several monitoring programs to look for ionospheric, thermal, and electromagnetic precursors using satellites and other means.

When asked where intuition comes from, Dr. Kautz replied: “Where does kindness come from? You’re born with it, it’s human.”

Pierre-Richard Cornely, an electrical engineer at Eastern Nazarene College in Massachusetts, presented new research along these lines at the 2014 annual meeting of the American Geophysical Union. According to Earth Magazine, Cornely found unusual atmospheric electron activity recorded by satellites above Haiti leading up to the magnitude-7 earthquake that devastated the capital on Jan. 12, 2010. Cornely hopes to use a GPS network in Haiti to derive electron density data that could detect mounting stresses before any future earthquakes strike.

Ivy Carter Beaumont, a schoolteacher in England in the 1930s, spoke an unusual language, and spoke it a lot. She claimed that it was ancient Egyptian, though Egyptologists in London denied it at the time—they refused to take the claim seriously enough to study it in depth, Dr. Kautz said.

Dr. Kautz dug up the original research, including 44 notebooks filled with the phonetic transcriptions and an audio recording of her speech. He also looked at records of conversations with her by an amateur Egyptologist who inserted her vowels into a few dozen samples of written Egyptian so he might dialog with her. The Egyptian written texts on ancient monuments and in documents don’t have vowels, so no one knows what this dead language sounded like. That Beaumont perfectly understood what the Egyptologist said to her after he inserted her vowels, shows she was genuinely able to speak ancient Egyptian, Dr. Kautz explained.

Further intelligibility tests conducted by Dr. Kautz confirmed Beaumont’s language and the written language on the monuments was the same.

“This Egyptian experiment is pretty darn empirical,” Dr. Kautz said. “It’s truly a question of how you integrate this innate capacity that people have—this capacity of intuition—into an existing science, which is operating in a much different way. Any changes in science will have to be slow, we know that, because you’ve got a lot of people to convince and a lot of beliefs to change. So we try to do something here that is evidential, which will appeal to the careful thinking, to the empirical side of science.”

“Intuition is offered as another way of knowing,” Dr. Kautz said. “It’s also called innate knowing.” When you ordinarily receive information intuitively, he said: “You usually reject it immediately—a sudden piece of truth can be upsetting—but sometimes it hits home and you just know it; there’s no question about it, there’s no doubt about it. That’s the way intuition works.”

“What is intuition? It’s the capacity of human beings to obtain knowledge directly, without the use of rationality, sensing, or memory in its usual sense.”

When asked where intuition comes from, Dr. Kautz replied: “Where does kindness come from? You’re born with it, it’s human.”

Dr. Kautz was a “pretty straight scientist” when he began his career, he said. His adventurous wife opened his horizons, introducing him to expert intuitives who were able to tell him things about himself he’d never told anyone—people who were able to answer unspoken questions in his mind. These “aha moments,” as he described his encounters with such people, led him on the quest to find a place for intuition in science. “Or rather, I found a place for science in intuition.”