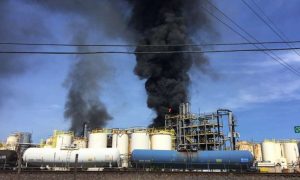 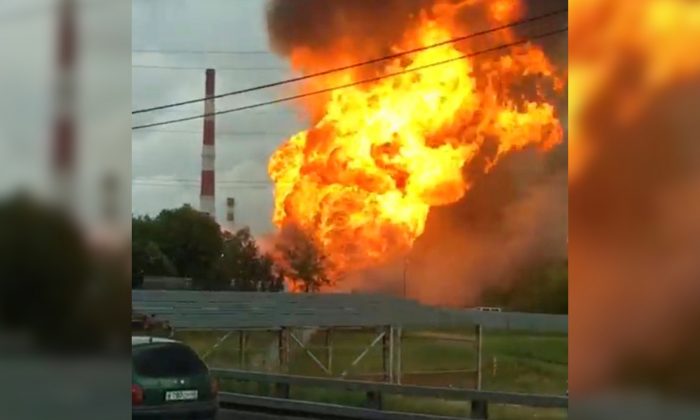 A still image taken from video footage shows the fire at an electricity generating power station in the Moscow region, Russia, on July 11, 2019. (Instagram/almazov88 via Reuters)
Europe

MOSCOW—A major fire broke out at an electricity generating power station near the capital Moscow on Thursday, July 11, the TASS news agency cited a source in the emergency services as saying.

Huge flames could be seen leaping into the sky from Thermal Power Station-27 in the Mytishchi district northeast of Moscow.

Footage circulating on social media showed the flames leaping into the sky at the facility. An eyewitness quoted by the RIA news agency said the flames were 50 meters (165 feet) high.

“The Emergencies Ministry’s Moscow branch told the Interfax news agency that the fire erupted at a high-pressure gas pump on the premises of the station,” RFERL reported.

Emergency services deployed more than 150 firefighters to the scene, as well as dozens of vehicles including fire engines, helicopters and trains, Zhanna Terekhova, spokeswoman for the emergency services, said on state television.

There was no risk of the fire spreading to residential areas, she said, adding that firefighters hoped to extinguish the blaze within the hour.

“In firefighting terms, the blaze has been given the highest level of difficulty,” RFERL reported.

The city of Mytishchi lies to the northeast of Moscow, on the Yauza River and the Moscow-Yaroslavl railway, according to Wikipedia.

By Maxim Rodionov and Tom Balmforth