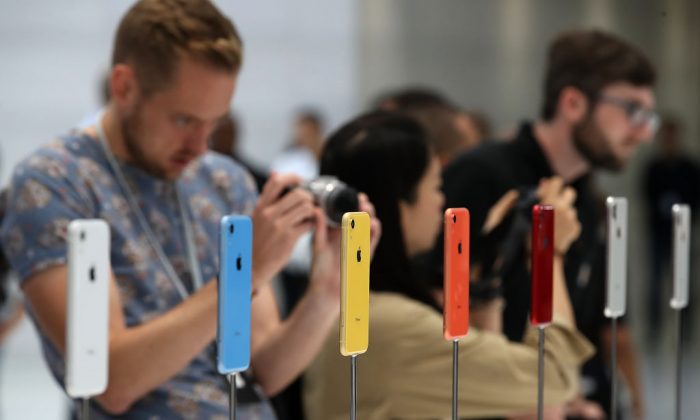 Another Apple supplier, the second in less than a month, has announced plans to relocate production out of China due to trade-war pains.

Pegatron, a Taiwan-based contract electronics manufacturer in charge of assembling two of the latest iPhones models, XR and XS Max, announced the relocation plans during a recent investor teleconference, according to a Nov. 9 article by Japanese media Nikkei.

“We are going to do it with or without tariffs imposed under Section 301 [of the U.S. Trade Act of 1974],” said Charles Lin, Pegatron’s chief financial officer, during the teleconference. He added that “the intensifying trade tension accelerates our decision to do it.”

The U.S. administration has slapped tariffs on a total of $250 billion worth of Chinese goods, after a Section 301 investigation of China’s trade practices by the U.S. Trade Representative (USTR) found that Beijing engaged in systematic theft of U.S. intellectual property and other unfair tactics, harming U.S. interests. The long list of targeted Chinese imports includes electronic parts and components that make up many electronic devices, including Apple products.

China’s GoerTek, an acoustic component maker based in eastern China’s Shandong Province that assembles Apple’s AirPods wireless headphones, announced in mid-October that it would relocate its production to Vietnam to avoid U.S. tariffs.

Lin didn’t name a specific country that will host the company’s new manufacturing plants. He did, however, say that up to three countries in Southeast Asia will be home to the new sites—given that not a single country apart from China can handle the logistical concerns involved with managing multiple sites during peak manufacturing season.

There is also a plan to move some of the current production in China to existing manufacturing sites in the Czech Republic and Mexico, Pegatron CEO S.J. Liao said during the same teleconference, according to Taiwan’s English-language newspaper Taipei Times.

Liao explained that building new manufacturing sites in Southeast China would be costly, and it would take two to three years before these sites could be operational.

Another reason trying to the company to decide to move production away from China are the rising wages and labor shortages in China during peak season, Nikkei reported, citing Lin, who said these problems have become more serious in the last three or four years.

Nevertheless, moving production outside of China doesn’t really solve all the problems. According to Taipei Times, Lin explained that to avoid U.S. tariffs on Chinese goods, a product exported to the U.S. market must have at least 30 to 35 percent of its components deriving from the local country.

This country-of-origin rule makes it hard for electronic assemblers like Pegatron, explained Lin, for the company relies on China’s component supply chain.

Pegatron and another Taiwanese company, Hon Hai Precision Industry, also known as Foxconn, have been major assemblers for iPhones in recent years. According to Taiwanese media, Pegatron was awarded about 50 to 60 percent of all iPhone XR orders from Apple, while Foxconn got about 30 percent. For the previous model iPhone X, Pegatron got about 5 to 10 percent of orders while Foxconn got 90 to 95 percent.

In an interview with Nikkei, Nicole Tu, an analyst at Taiwan-based Yuanta Investment Consulting, said the firm has lowered its forecast sales of iPhone XR from 39 million units to 32 million due to weaker-than-expected demand for XR.

Tu agreed with the need for electronic assemblers to move production outside of China to avoid trade war risks. She added that eventually manufacturers of electronic components that make electronic devices—such as camera lens, phone screens, and plastic casings—will also follow suit and move their productions elsewhere in order to stay competitive amid the trade war.