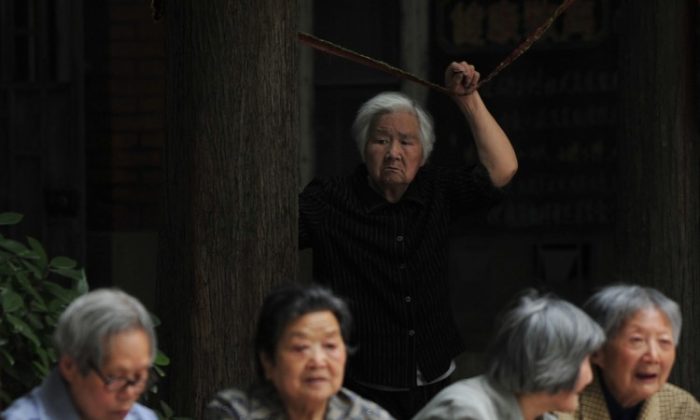 A group of elderly women in Nanjing City, China, whose social security money is not safe, according to reports. (The Epoch Times Archives)
Chinese Regime

Beijing announced its pilot scheme of private retirement plans, with the participation of four large, state-owned banks, that will be launched in November in five cities. Chinese netizens expressed their distrust of the Chinese banks, and an economist said the plan is a way to cover up the failing economy.

Chinese netizens responded to the news with comments that showed widespread distrust of the program: “Just a trick to squeeze your wallet,” “Stop insulting my intelligence,” “My money is safer with me,” and “Nothing good will be shared with the people.”

Mr. Wang, a mainlander, told the Chinese language edition of The Epoch Times on July 31, that he believes the Chinese Communist Party (CCP) is running out of money, but “They are good at deceiving the people,” Wang said.

State Pension Will Run Dry by 2035

In the 2019 “China Pension Actuarial Report 2019-2050” report, the Chinese Academy of Social Sciences (CASS) researchers estimated that the urban worker pension fund will be exhausted by 2035 due to a stagnant work population. That is, those born between 1980 and 1989 are likely to retire without any pension.

Economist Li Hengqing believes that the CCP’s one-child policy (1980-2015) is the reason for the decline in the workforce and the rapid increase in an aging Chinese population.

As early as 1991, China adopted a voluntary, supplemental enterprise annuity system with the hope of providing pension benefits to workers without imposing a financial burden on the government.

Li explained that the number of participating enterprises is very limited, mostly the state-owned ones. “The private enterprises barely have the capacity to join the system,” he said.

As of the end of 2021, Chinese enterprise annuity participants only accounted for 3.85 percent of the national employed population, according to a report by the human resources and social security department and the national statistics bureau.

The Dominos Are Starting to Fall

The collapse of the pension system will create major social unrest and be a challenge to the CCP’s governance.

The push of private retirement savings is the latest effort of the regime to fill the gap in the balance sheet of the pension system.

Li pointed out that the mission of the pilot scheme of private retirement is to hold onto the last remaining savings it has in order to solve the crisis of a break in the monetary chain.

He said that the collapse of the Chinese economy and society as a whole has begun; from homebuyers refusing to make mortgage payments, to bank depositors unable to withdraw their money, and the pension funds drying up, “The dominoes are falling,” Li said.

Haizhong Ning, Luo Ya and Yi Ru contributed to this report.