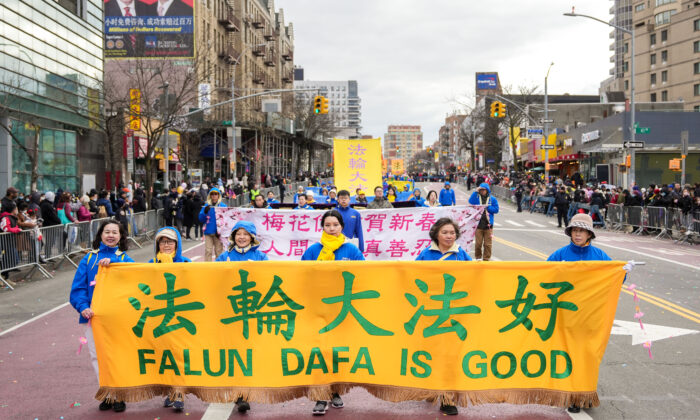 It’s long been a tradition for Chinese people to welcome the Lunar New Year by sending greetings and goodwill to loved ones and those they respect.

As China ushered in the Lunar New Year on Jan. 22, people across the nation recently sent ecard greetings to Mr. Li Hongzhi, the founder of the spiritual practice Falun Gong, also known as Falun Dafa.

The discipline, rooted in ancient Chinese beliefs on spiritual improvement, was first introduced by Mr. Li to the Chinese public in 1992. With gentle, meditative exercises and moral teachings based on the principles of truthfulness, compassion, and forbearance, Falun Gong attracted individuals from all walks of life—from high-ranking officials to farmers—leading to an estimated 70 million to 100 million adherents in the country by the end of the decade.

Its surging popularity, however, was perceived by the communist regime as a threat to its control over society. In 1999, then-Chinese Communist Party (CCP) leader Jiang Zemin ordered a sweeping campaign to eradicate Falun Gong, leading to millions of practitioners being thrown in detention facilities, where they are brainwashed, tortured, or even killed for their organs.

In a bid to enlist the Chinese public’s support for the persecution, the communist regime also launched an expansive propaganda campaign aimed at demonizing the practice, spread through state media and school education.

To counteract the regime’s pervasive smear campaign, Falun Gong adherents inside China have formed a massive grassroots resistance effort to debunk the CCP’s propaganda and expose the persecution of the spiritual practice. The peaceful resistance involves distributing informational materials and speaking directly to Chinese, a process that adherents describe as “clarifying the truth.”

This year, tens of thousands of Lunar New Year greeting cards from mainland China once again poured into Minghui.org, a U.S.-based website that reports news related to Falun Gong and the persecution, revealing the practice has remained strong in China despite the regime’s unrelenting suppression campaign.

Besides well wishes from Falun Gong adherents around the world, mainland Chinese who haven’t taken up the practice also sent their greetings, which can be viewed on dozens of pages recently published on Minghui.

The well-wishers hailed from regions across the nation, from metropolitan centers like Beijing and Tianjin to rural villages in remote areas of south China’s Yunnan Province. In the e-cards, Mr. Li is typically addressed as “Master,” a title of respect for a teacher or instructor in Chinese culture, though most individuals didn’t leave their names on the message for fear of reprisals during the ongoing persecution.

Among the cards wishing Mr. Li a heartfelt happy Lunar New Year is one created by a Tianjin resident.

“After being indoctrinated by atheism, evolutionary theory, and the Chinese Communist Party’s theories from childhood, I became narrow-minded and did many wrong things, generating lots of karma,” the resident wrote, referring to the traditional Chinese concept of karma, which is accrued by committing bad or immoral deeds.

“Thanks to [Falun Gong] practitioners who clarified the truth to me. [Their words] helped me understand how to become a good person and that the evil CCP is eroding humans’ mortality. The CCP has committed unforgivable evil deeds. I hope the CCP will perish soon,” the card continued. The resident added that though he is not a Falun Gong practitioner, he had read almost all most Mr. Li’s lectures. “I truly believe Falun Dafa is righteous.”

Another resident from the coastal province of Shandong in eastern China sent greetings on behalf of his family.

“There are eight people in my family who’ve taken up the practice. By following [Falun Gong’s] teachings, they set a good example and make our family harmonious and happy. All of our family members support Falun Gong. We believe Falun Dafa is great!” read the greeting message. “We all hope the persecution will end soon so that disciples can practice their belief freely.”

As the Chinese regime lifted the harsh travel restrictions in December, millions of Chinese people were finally able to travel home for the Lunar New Year after three years of separation under the regime’s draconian zero-COVID policy.

But with the outbreak now spreading like wildfire in China, overloading hospitals and funeral homes, the joy of long-awaited family reunions has been mixed with anxiety about catching the virus.

“Almost 90 percent of the population in the urban area of my city was infected. The massive outbreak has made people pressured, panicked, and helpless,” a resident from Harbin city in northeastern China’s Heilongjiang Province wrote in a greeting card published on Minghui.org.

While some of his loved ones were also infected, the writer said they managed to ward off severe physical symptoms and the psychological strain with the help of Falun Gong’s teachings. By “keeping kind thoughts and gratitude and reciting “Falun Dafa is good” and “Truthfulness-Compassion-Forbearance is good,” the man said everyone in his family was able to “safely get through the disaster.”

Mr. Li, in a March 2020 article issued at the onset of the pandemic, stated that the pandemic was arranged by the divine because mankind’s morals had deteriorated, adding that the virus has a “purpose behind it, and it has targets.”

“It is here to weed out members of the [Chinese Communist] Party and those who have sided with it,” Mr. Li stated.

The “best medicine” during the pandemic, Mr. Li stated, was to withdraw from the CCP and its affiliated organizations, or sincerely say the “true words,” referring to “Falun Dafa is good” and “Truthfulness-Compassion-Forbearance is good.”

Another resident from Beijing’s Shijingshan district also recounted his family’s experience during the huge wave of infections.

“Almost all of the neighbors were infected at one time, including a family who had been self-isolated for a month … But in my family, no one tested positive,” the resident’s message read.

“We believe the pandemic targets people aligned with the CCP,” the resident wrote, referring to Mr. Li’s March 2020 article. He added that all of his family have renounced their affiliations with the Party. “We sincerely thank Master Li for saving our lives.”

After learning the facts about Falun Gong and persecution, many mainland Chinese said they hoped the brutal suppression would end soon, especially since the former CCP leader who orchestrated the persecution died recently.

“Jiang Zemin is dead. The collapse of the Chinese Communist Party will come soon … We are looking forward to the day of reunion with you,” read a message from a resident of Pingshan county in northern China’s Hebei Province.

Leo Timm and Annie Wu contributed to this report.