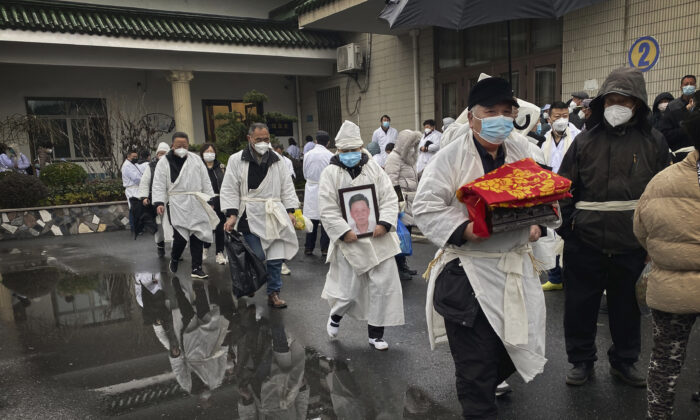 A mourner carries the cremated remains of a loved one as he and others wear traditional white funeral clothing, during a funeral in Shanghai. (Kevin Frayer/Getty Images)
By Eva Fu

Never has the winter felt so suffocating for Zou, who counted about 20 deaths among his social circles amid the massive COVID-19 wave that’s gripping China.

Memorial tents, indicating households that have lost family members, are visible on every street in his hometown in the historic city of Yueyang in southern China’s mountainous Hunan Province, with a population of about 20,000 people.

It’s so many that “it’s scary,” Zou, who only provided his surname for fear of reprisals, told The Epoch Times.

He said the sky seems darker than usual, without much sunlight, further heightening a sense of dread in the small town as the outbreak casts a huge shadow. In the past three to four days alone, 100 to 200 people have died from the disease, he said on Jan. 23.

In Shaoyang, a city with a population of about 1.5 million people that’s about a four-hour drive south, a resident who declined to provide his name for safety reasons said thousands of elderly people have likely died during the outbreak. At one point, four families living on the same alley were in mourning, he told The Epoch Times on Jan. 18, describing it as “unbelievable.”

The mounting fears have dampened the holiday spirit amid Lunar New Year festivities, normally the biggest celebration of the year, that began over the weekend.

A video clip circulating on social media two days before the Chinese New Year, captured from a car passing through a residential area, shows a deserted street lined with an unceasing array of wreaths and blue-and-white paper lanterns marking the deceased.

“You watch what happens to your neighbors and worry about your own families,” a woman surnamed Bao from Shijiazhuang city in Hebei Province told The Epoch Times. Like other interviewees, Bao declined to provide her first name to avoid drawing government retaliation. The new year for her went by without the usual visits to her extended relatives, she said.

As the virus sweeps across the country, the Chinese communist regime has continued to conceal the true scale of the outbreak. However, widespread accounts of deaths, overwhelmed hospitals and crematoriums, and a shortage of funeral supplies point to a significant death toll.

The rise in deaths has led to crematoriums around the country scrambling to dramatically expand their capacity.

An Epoch Times review of 10 provinces and major cities found that more than 30 funeral homes published tenders for cremation ovens, ash urns, vans to transport bodies, and refrigerators over the past three weeks alone.

“Because of the sharp surge in business, we urgently need to buy two ash sorting machines and post-processing equipment,” reads one Jan. 19 notice published by Huzhou Funeral House in Zhejiang Province, located south of Shanghai.

In a now-deleted Jan. 6 tender from the Shantou city government in southern Guangdong Province, a funeral parlor solicited an “emergency purchase” of two incinerators to be ready for use in 10 days. At about that time, a major Shanghai crematorium told The Epoch Times that they were burning 400 to 500 bodies every day—four to five times their highest workload before.

As mourning displays lined Chinese streets and hearses created traffic jams outside of crematoriums, the price of burial merchandise has surged amid skyrocketing demand.

Multiple ash urn and coffin suppliers confirmed that they were out of stock or running extremely low on inventory when reached by The Epoch Times ahead of the Lunar New Year. Each interviewee either gave only their surname or declined to be identified for fear of reprisals.

An ash urn manufacturer in Henan, the country’s third-most populous province, was out of stock and restocking could take about a month, a sales representative surnamed Sun said. Sun noted that this was unprecedented in the nearly two decades that she has been working in the industry.

“It was never like this,” Qiu, a representative of a different urn maker in neighboring Shandong Province, told The Epoch Times, pointing to COVID-19 as the cause of the “storm” of incoming orders.

A coffin maker in Jingdezhen, a city that’s famed for ceramic arts, said he had no more than two items on hand for the product lines that haven’t sold out and has advised clients to buy whatever is available without choosing.

“Frankly, too many people died this year, and the demand is too high; we just can’t make enough,” he told The Epoch Times.

Accounts from the locals across the country were equally grim.

A woman from Suzhou, a city near Shanghai, lost three older family members, including her mother on the same day earlier this month. The local funeral home had set a limit of 400 spots over a 24-hour period. On Jan. 5, she and several others from her family tried to grab a number when the spots opened at midnight; in 28 seconds, they were placed at about 160th. The funeral cost for her mother was more than 10,000 yuan (about $1,474), double the amount for such a service in the past.

The extreme shortage of funeral supplies meant that there were no cardboard or wooden coffins available for her mother’s remains. All that was left was a paper bag and shroud, the woman, who used the pseudonym Liang Yan, told The Epoch Times.

As the vast Chinese population struggles under an explosive COVID-19 outbreak, authorities in Beijing have sought to superimpose a different reality.

On the same day that a top Chinese state-backed university released a report indicating 900 million infections during the latest wave of COVID-19, officials at Beijing’s Center for Disease Prevention and Control convened a conference celebrating three years of anti-outbreak work, during which they gave out dozens of awards, with the center’s Party chief, Huang Chun, declaring that the agency has “lived up to their mission.”

Echoing the triumphant tone was Jiang Yunzhong, a Marxist scholar and Party official at the elite Tsinghua University in Beijing, who said that the COVID-19 death toll in China “still falls in an acceptable range.”

“Even if a few million die, so what?” he wrote on Chinese social media on Jan. 14. “China had 10 million deaths in 2021; even if there are 5 million more deaths, it’s just a 50 percent increase—a difference between two deaths versus three deaths. ”

So far, the regime has acknowledged roughly 72,000 deaths, a number that has drawn a high degree of skepticism among experts and residents.

“It’s a tragedy in human history,” Zou said. “They see this as a funny joke and even want to boast about their accomplishments and make it a model for the world. They don’t care at all what the regular people think.”

The unrealistic virus figures are what has changed the minds of the older generation who grew up under the regime’s brainwashing and normally wouldn’t countenance any discussion critical of the Chinese Communist Party, according to Zou, who described this as a sign of the “red genes breaking down.”

“I could see they were really angry,” he said. “When they speak, they would ask: ‘Why are they reporting data like this?’ They couldn’t understand.

“They used to excuse everything [the authorities] said, but now they have completely lost trust in them.”