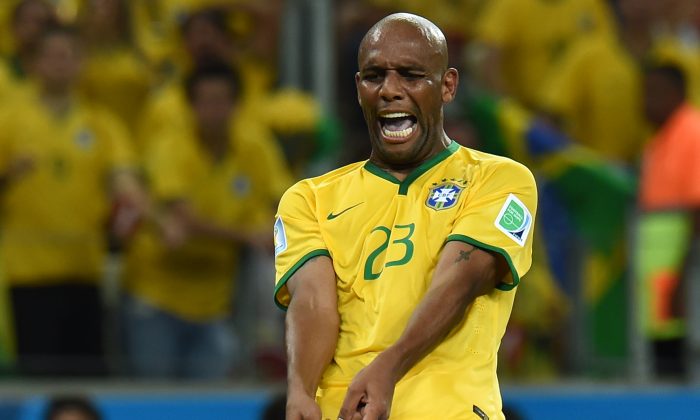 Brazil's defender Maicon gestures during the quarter-final football match between Brazil and Colombia at the Castelao Stadium in Fortaleza during the 2014 FIFA World Cup on July 4, 2014. (VANDERLEI ALMEIDA/AFP/Getty Images)
Soccer

Brazilian right back Maicon believes that he got selected for the World Cup because of his being at Serie A club Roma.

The 32-year-old right back left Manchester City last year and moved to Roma, and says that his regained self-confidence because Roma coach Rudi Garcia and the Roma fans have been supportive of him.

“I will always thank Roma for giving me this opportunity, as well as my agent and the fans who have always supported me,” said Maicon to TuttoSport, when asked about how he earned a place in Luiz Felipe Scolari’s squad.

“[Rudi] Garcia has been the best in building this group.

“But also at Roma, like here in Brazil, something is missing: to never believe you have fully arrived at your goal.

“In England I was lost, in order to put in my best I must feel the confidence around me.

“This happened at Roma and, in fact, before the World Cup began I had thanked the club for my return to the national team.

“Now I’m focused on winning the World Cup, then I want to win the Scudetto with Roma,” Maicon concluded.