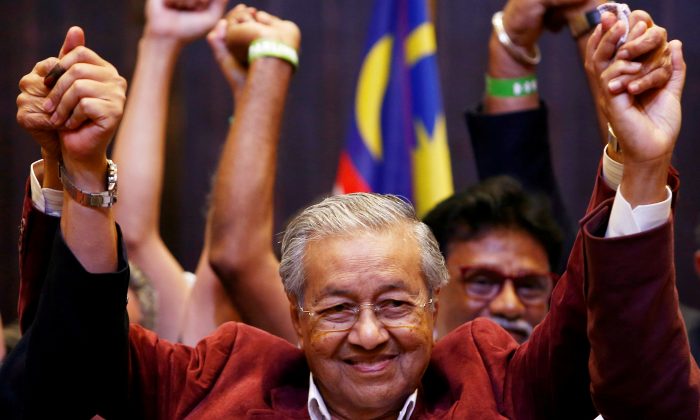 KUALA LUMPUR–Mahathir Mohamad was sworn in as Malaysia’s seventh prime minister on Thursday following his stunning election victory over the Barisan Nasional (BN) coalition that has ruled the Southeast Asian nation for six decades since independence from Britain.

Mahathir, 92, was dressed in a traditional black “baju melayu” tunic and sarong with a Muslim songkok cap on his head. He is the oldest elected leader in the world.

Hundreds of Malaysians were lined up on the road leading to the palace, waving party flags and cheering. The Election Commission announced the result long before dawn but outgoing Prime Minister Najib Razak appeared to be making a last ditch effort to question Mahathir’s right to be sworn into office, acting to delay the time taken to swear in the new prime minister.

Najib argued that Mahathir could not immediately take office because no single party had won a simple majority of seats in the 222-member parliament, and it would be up to the King to decide the result of the election.

Najib’s BN coalition won only 79 parliament seats compared to 133 seats in 2013, which was itself the coalition’s worst poll performance in its history.

Mahathir dismissed any doubts he would be prime minister, saying “I want to emphasise that our coalition, Pakatan Harapan, has already won a clear majority and therefore we are invited to form a government. We stand by the rule of law and whatever we do must be governed by the constitution.”

He said he had been assured of support from a raft of parties that would give his government 135 members of parliament.

“There is an urgency here, we need to form the government now, today,” Mahathir told a news conference earlier in the day.

A palace statement earlier dismissed suggestions that the appointment was delayed. “His Majesty strongly supports and respects the democratic process and the wishes of his subjects,” it said.

Mahathir ruled Malaysia as the longest-serving prime minister from 1981 to 2003. He came out of retirement to take on his former protege, Najib Razak, who was prime minister for nearly a decade. But according to Mahathir, Najib had changed what the party had stood for and was moving the country closer towards a dictatorship.

“What we want to do is to restore the rule of law,” Mahathir said.

Few had expected Mahathir to prevail against a coalition that has long rallied on a message directed to gain the support of Malaysia’s ethnic-Malay majority.

However, he joined hands with jailed political leader Anwar Ibrahim, his one-time deputy he famously fell out within 1998, and together their alliance exploited public disenchantment over increasing costs of living and a multi-billion-dollar scandal involving the state-owned fund 1Malaysia Development Berhad (1MDB) that has dogged Najib since 2015.

“This election has proved to us that we moved beyond racial politics,” said Khoo Ying Hooi, a professor of international and strategic studies at the University of Malaya. “It’s really people power through the ballot.”

Mahathir said that one of his first actions would be to seek a royal pardon for Anwar. Before the poll, he had promised to step aside once Anwar was free and let him become prime minister. His wife, Wan Azizah Wan Ismail, is to be deputy prime minister.

Anwar was imprisoned first by Mahathir on charges of corruption and sodomy. He was released in 2004 but jailed again by Najib in 2015.

Mahathir and Najib were once allies but they clashed over a scandal around 1MDB, a state fund from which billions of dollars were allegedly siphoned off.

The 1MDB affair is being investigated by at least six countries, although Najib has denied any wrongdoing and has been cleared by Malaysia’s attorney-general.

Mahathir had vowed to investigate the scandal if elected and bring missing funds back to Malaysia. On Thursday, he said that if Najib had done anything wrong he would “face the consequences.”

Mahathir said that his government would likely reverse some policies implemented by the BN coalition, including a highly unpopular goods and services tax (GST).

The 92-year-old told a news conference he supported China’s Belt and Road initiative (BRI) but said Malaysia reserved the right to renegotiate terms of some agreements with Beijing if necessary.

“We have no problem with that (BRI) except, of course, we would not like to see too many warships in this area because (a) warship attracts other warships,” he said.

A Nomura report last month showed that Malaysia is one of the largest beneficiaries of Chinese state investment commitments in Asia, securing $34.2 billion of BRI-related infrastructure projects, which have prompted critics to accuse Najib of “selling” Malaysia to the Asian powerhouse.

Najib conceded the election in a news conference on Thursday but has not been seen in public since. He did not attend the swearing in ceremony at the palace.

By Rozanna Latiff and Joseph Sipalan