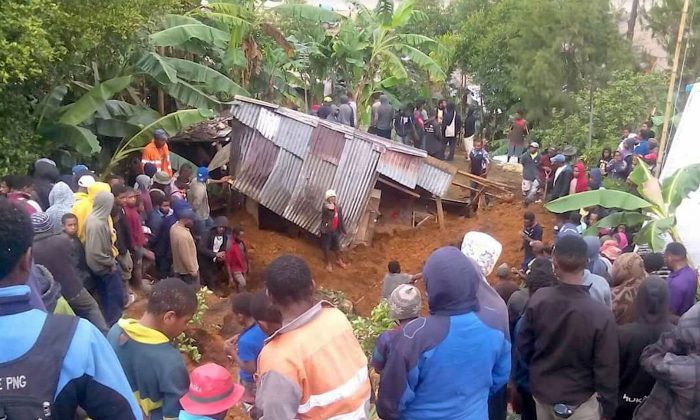 Locals surround a house that was covered by a landslide in the town of Mendi after an earthquake struck Papua New Guinea's Southern Highlands in this image taken Feb. 27, 2018, obtained from social media. (Francis Ambrose/via Reuters)
Asia & Pacific

“We haven’t slept. It’s been shaking all through the night,” said William Bando, provincial administrator of Hela Province, by telephone from Tari, about 40 km from where the shocks hit.

“What we experienced this morning could have caused more damage, but we don’t know … it almost threw me out of bed.”

Papua New Guinea Earthquakes:
– Magnitude 7.5 earthquake hit the region on Sunday
– At least 20 people dead
– Dozens of people are missing
– Over 75 earthquakes magnitude 4.0 or over shaked the region since Sunday
– Widespread damage and landslides reported pic.twitter.com/ulZLfaZKhu

The national disaster center in Port Moresby could not immediately be reached by telephone.

The strong tremors hit a region already badly damaged by the magnitude 7.5 quake that struck on Feb. 26, the largest to hit the seismically-active highlands in nearly a century, triggering landslides, flattening buildings and closing oil and gas operations.

Dozens of aftershocks 5.0 or greater in magnitude have rocked the region since the main quake last Monday.

Landslides triggered by the 7.5 M quake and the aftershocks in Papua New Guinea (25/02/2018 – Region of Hela and Southern Highlands Province). A comparison between the pre and post event images. #landslide #GreatPapuanEarthquake @ITHACA_org @CopernicusEU @sentinel_hub pic.twitter.com/j2NOVATZDc

While the region has no major urban centers, around 670,000 people live within 100 km (62 miles) of the epicenter, according to the Red Cross.

At least 13 people were killed when hamlets nearest the epicenter were buried. Most of the other casualties were in the provincial capital of Mendi and the township of Tari, officials told Reuters.

Australia, New Zealand and the Red Cross have all pledged aid, though reaching the remote area has proven challenging as forbidding terrain, bad weather, as well as damaged roads and runways have delayed aid efforts.

“This was the biggest earthquake in a hundred years and it spread 150 kilometres across the fault line,” Darian Clark, the humanitarian duty officer at the Australian high commission in Papua New Guinea, said, according to the Guardian. “A number of urban settlements, as well as villages, have been affected. Many in the form of landslides and landslips, which means that roads have been cut off, water contaminated, power knocked out and other widespread effects for the local people.

“The rugged terrain and loss of communications in the area impacted means it is taking time to build a complete picture of the damage but we know that tens of thousands of people are reported as requiring humanitarian assistance,” New Zealand Foreign Affairs Minister Winston Peters said in a statement on Monday.