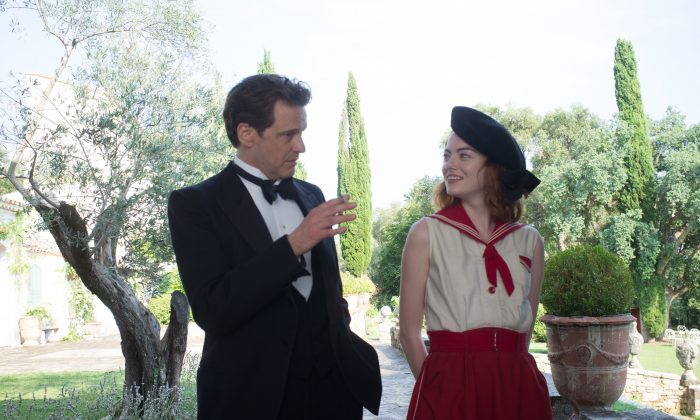 ‘Magic in the Moonlight:’ Another Dose of Woody Allen’s Ongoing Existential Crisis

It’s likely that Woody Allen’s latest movie, “Magic in the Moonlight,” was lifted straight from Harry Houdini’s book “A Magician Among the Spirits.”

Back in the Roaring Twenties, séances and swindling mediums were rampant, and their debunking, by legendary magician Harry Houdini, was an event of interest.

Exposing spiritualist speciousness provides a convenient platform for writer-director Woody Allen to trot out his standard list of favorite things.

All this, of course, is accompanied by Allen’s other all-time favorite thing: 1920s jazz, with bass, banjo, and clarinet chugging and tootling in the background.

“Magic” may check off all the classic Allen ingredients, but it appears to suffer from a case of “I don’t feel like writing a second draft.” Or Woody resting on the Allen laurels. Or old age. Or all of the above. It’s a lightweight offering.

Colin Firth plays Houdini, er, Stanley, a magician who moonlights as a debunker of mystics. And here we have, all of a sudden, divined the mystery of the movie’s title.

Moonlighting in debunker mode, Stanley digs for information about a comely young American medium named Sophie (Emma Stone) like a fox attempting to burgle a henhouse.

Stanley’s very annoying. Not since Henry Higgins enjoyed picking on lowly Eliza Doolittle, has there been such a misanthropic, supercilious, chauvinistic British blowhard. To use one of the more excellent British-isms, Stanley’s a miserable git.

Stanley initially pegs Sophie as a faker with a managing stage mother (Marcia Gay Harden), but little by little, her forays into and reportage of the spirit world add up to too much evidence for him to refute.

Stanley has no choice but to admit that the truth on display is astounding and amazing. But in the end, he says he doesn’t believe in these things.

One last drop of Sophie’s spiritual proof in Stanley’s reservoir of disbelief bursts his heavily fortified atheist dam, and all his pent-up yearning to believe explodes in newfound ecstasy and desire to stop and smell the roses.

Stanley may be a Harry Houdini stand-in, but he’s primarily a Woody Allen stand-in; Allen having been down this road before, looking for answers, daring someone to refute his notions that there’s no life after death, no creator, and no grand scheme.

He does cede that Stanley is a happier man when he finally finds faith, but still manages to suggest that Stanley’s now simply deluded.

Allen’s ingrained belief that deluded happiness or existential misery buffered by distraction are the only two choices in life—is just sad. It might also be the wellspring of all those “Where-there’s-smoke-there’s-fire” recent personal allegations.

Anyway, as soon as the director’s favorite philosophical piece has been addressed, with much citing of Hobbes and Nietzsche, we get into his second (but no less favorite) preoccupation: the inexplicable nuttiness of romance and lurve. Yes, “lurve.” Hint: “Annie Hall.”

Who will win Sophie’s lurve? A gangly, poodle-haired scion (Hamish Linklater) whose high-society mom hires Sophie to conjure up her dead husband is ga-ga for Sophie. He serenades her, ad nauseam, with a ukulele, promising yachts and jewels. But Sophie’s gotten under Stanley’s skin too. Stanley can’t sleep.

“Magic” is yawn-inducing up until the moment Emma Stone steps on-screen. Her charisma is palpable. She’s clearly got an immensely rich inner life to be able to fill every second and hold attention as effortlessly as she does, regardless of the lazy script.

Part of the problem is that Stanley is so bloody beastly to Sophie and so ridiculously full of himself. Granted, given the fewer choices open to women in the ’20s, the outcome might be realistic, but Stone so clearly embodies a modern woman’s freedom and sense of self-worth, that it’s ultimately not possible to believe that Sophie can suffer Stanley’s insufferable ego.

All the individual performances, while quite good, don’t really add up to an exciting whole. However, Ms. Stone is eminently watchable. When considering writing a second draft, Woody Allen conceivably yawned, scratched his head, and thought, “Nah. Just cast Emma Stone. No matter what, she’ll make it interesting.” He was not wrong.