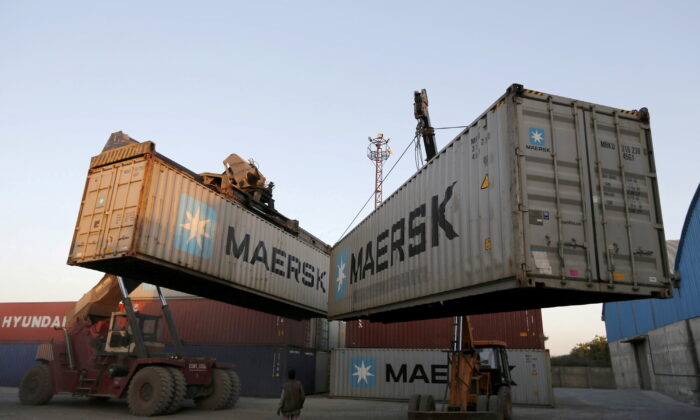 COPENHAGEN—Maersk raised its 2022 profit guidance for a second time on Tuesday after beating quarterly revenue expectations as congested global supply chains that have boosted freight rates persist longer than expected.

The shipping industry has seen record profits in recent quarters due to a surge in consumer demand and pandemic-related logjams holding up containers in key ports in China, Europe, and the United States.

It now expects underlying earnings before interest, taxation, depreciation, and amortization (EBITDA) of around $37 billion versus the $30 billion it forecast earlier. Maersk had initially expected full-year EBITDA at $24 billion.

The new guidance is based on a gradual normalization in ocean container shipping in the fourth quarter of this year. Its previous guidance was based on that happening early in the second half of the year.

The Copenhagen-based company is often seen as a barometer for global trade as it transports goods for retailers and consumer companies such as Walmart, Nike, and Unilever.

Maersk, one of the world’s biggest container shippers with a market share of around 17 percent, said in June that the cost of shipping goods was unlikely to abate anytime soon due to array of inflationary pressures.

Shares in Maersk were trading up 1.1 percent at 8:25 a.m. GMT after touching their highest levels since early June.

Revenue in the second quarter stood at $21.7 billion, it said, above the $19.7 billion forecast by analysts in a poll gathered by the company.

Underlying EBITDA was $10.3 billion, compared to the $8.2 billion forecast by analysts.

“The strong result is driven by the continuation of the exceptional market situation within ocean (container shipping),” the company said.

Maersk is due to publish a full set of results for the second quarter on August 3.