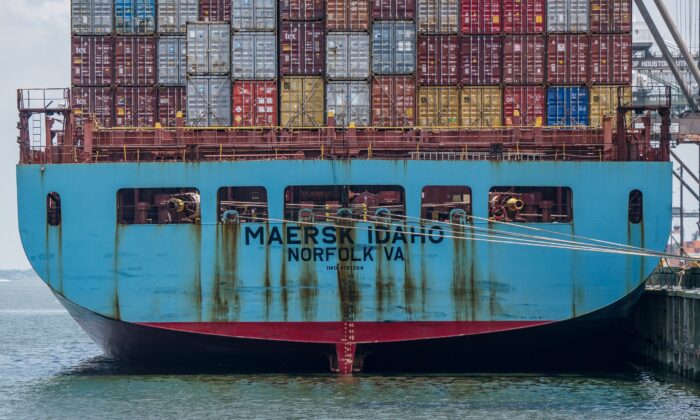 The Maersk Idaho container ship is shown at the Port of Houston Authority in Houston, Texas., on July 29, 2021. (Brandon Bell/Getty Images)
Companies

COPENHAGEN—Shipping group Maersk expects 2022 earnings to be around as high as last year, it said on Wednesday, as the supply chain disruption that sent freight rates soaring extends into the first half.

It expects underlying earnings before interest, tax, depreciation, and amortisation (EBITDA) at around $24 billion this year, similar to last year, but slightly below the $24.4 billion expected by analysts in a poll gathered by the company.

Its shares were down around 2 percent in early trading and have fallen 11 percent since reaching an all-time high in mid-January.

While Maersk’s customers faced “severe challenges,” the record-high rates caused by pandemic-related congestion at ports, container shortages, and a surge in consumer demand led to “record-high growth and profitability in Maersk,” Chief Executive Soren Skou said in a statement.

He said the current market situation was expected to persist into the second quarter before easing later in the year.

Maersk, which handles about one in five containers shipped worldwide, increased dividend payout to shareholders to a total of 47 billion Danish crowns ($7.20 billion), or 2,500 crowns per share, compared to 330 crowns per share a year earlier.

The company reiterated preliminary fourth-quarter results published on Jan. 14, when the company said a fall in ocean-going container volumes by 4 percent was more than offset by freight rates improving 80 percent compared with a year earlier.

Maersk said last month that it had been overtaken by Swiss-based container group MSC as the world’s biggest shipper.