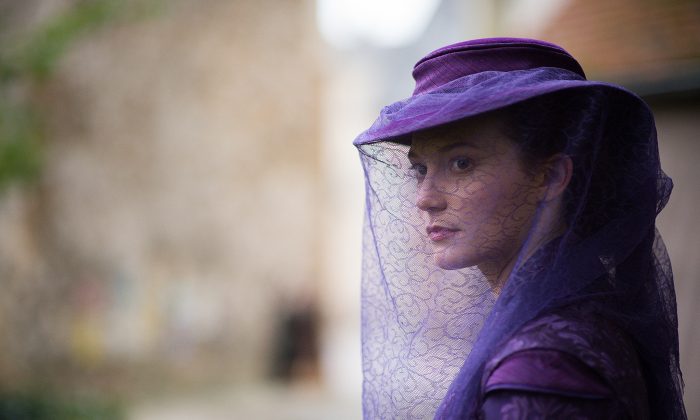 She has been played by Jennifer Jones and Isabelle Huppert, each of whom were problematic in their own particular ways. Despite being one of the greatest exemplars of literary realism, Flaubert’s novel has been a tough adaptation to crack, but not for a lack of trying.

While the likes of Vincente Minnelli, Claude Chabrol, and the BBC have all taken cracks at it, one of the most successful versions to date remains Anne Fontaine’s non-adaptation, by way of Posy Simmonds’s graphic novel “Gemma Bovery.”

However, by not getting too fancy, Sophie Barthes scores one of the better adaptations with her slightly simplified but reasonably faithful “Madame Bovary.”

As we all surely know, Emma Rouault will consent to a loveless marriage to Charles Bovary, a well-meaning country doctor, for the sake of stability and security. Of course, she soon grows dissatisfied with the provincial life, finding solace in the luxury home wares and fashionable gowns peddled by the predatory Monsieur Lheureux.

Initially, the convent-educated Bovary will struggle to remain faithful to her husband, but it is only a matter of time before she succumbs to the charms of first the dashing but callous Rodolphe Boulanger, followed by the cultured clerk, Léon Dupuis.

Spoiler alert—this will all end in tears. Of course, the title character bears the brunt of the responsibility and guilt, but Lheureux and Boulanger most certainly contributed in a deliberate manner to her downfall. Many adaptations practically crucify Bovary, but Barthes is more even-handed. In fact, she and the scenery-chewing Rhys Ifans portray Lheureux as quite the shameless villain, only missing a handlebar mustache to twist.

Somehow she is simultaneously vulnerable and coolly reserved.

Aside from Belgian actor Olivier Gourmet (“Two Days, One Night”) dropping in to add a thimbleful of Francophone authenticity as Monsieur Rouault, the ensemble players of note are all native English (or Welsh) speakers, which is fine. Apart from Brooklyn’s own Paul Giamatti (who played himself in Barthes’s debut “Cold Souls”), the cast all look and sound properly Masterpiece Theater.

Happily (if we can use that term in conjunction with Flaubert’s novel), the demands of Emma Bovary are quite well-suited to Mia Wasikowska’s talents. Somehow she is simultaneously vulnerable and coolly reserved. As the consequences begin to fall on her head, she makes us feel for Bovary just a little, but not too much. As usual, Giamatti is also fun to watch as the Iago-like Homais.

Barthes and cinematographer Andrij Parekh revel in the muddy dankness of her Yonville surroundings, which they markedly contrast with Wasikowska’s porcelain delicacy. Her tragic downward spiral makes far more sense as a result, than in prior cinematic interpretations.

Such a conventional literary production is a bit of a surprise as the follow-up to Barthes’s über-meta first feature, but by not overcomplicating her approach, she scores a stand-up double (to close with a baseball metaphor, in honor of Flaubert). Recommended for fans of prestige costume dramas, “Madame Bovary” opens Friday, June 12, in New York at the Village East.