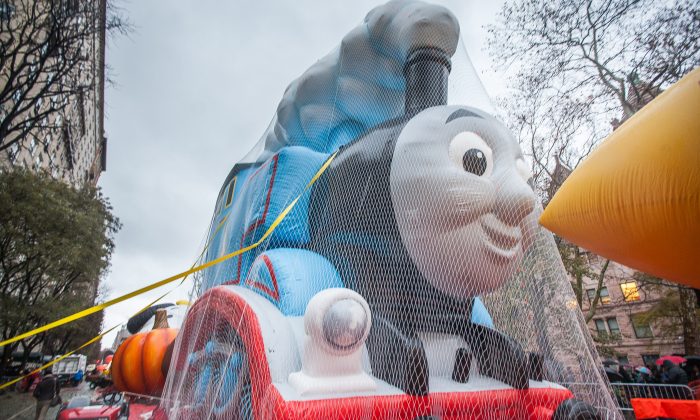 Thomas the Tank balloon of Macy’s Thanksgiving Parade after being inflated in the Theodore Roosevelt Park on Upper West Side, Manhattan, NY, on Nov. 26, 2014. (Petr Svab/Epoch Times)
New York

NEW YORK—Paul, Cynthia, Michael, Matthew, and Mia Russo from New Jersey made themselves a special treat this year. For the first time they came to New York to watch the Macy’s Thanksgiving Day Parade.

“It’s magical for the kids to see,” Cynthia said, as the family watched the parade’s signature giant balloons being inflated in the Theodore Roosevelt Park on Upper West Side.

And there is quite a bit to look forward to.

The Thomas the Tank balloon will make his first appearance and will be the parade’s lead. The giant smiling locomotive, the biggest balloon since the creation of the parade in 1924, required five times more fabric than what’s usually needed to make a giant balloon.

It’s also one of the most complex, due to its boxy shape. “Balloons want to be round,” noted Orlando Veras, Macy’s media relations director. There are lines inside the balloon to keep its shape, he explained.

Among other new inflatables is a huge red morphing Power Ranger—second longest to the Toothless the Dragon balloon. A newly constructed yellow Pokémon Pikachu will return this year, already its third version.

Another balloon nouveau, Eruptor from Skylanders videogame, owes his shininess to five gallons of neon paint and three barrels of glitter.

The Russos will have to enjoy the parade in temperatures below 40 degrees with a forecast of a 20 percent chance of snow or rain, according to the National Weather Service.

The parade starts at 9 a.m., beginning on 77th Street and continuing along Central Park West, then turns at Columbus Circle then down Sixth Avenue to 34th Street and ends, as always, at the Macy’s store at Herald Square.