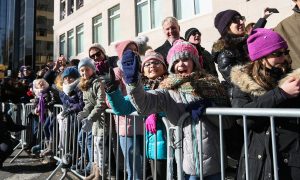 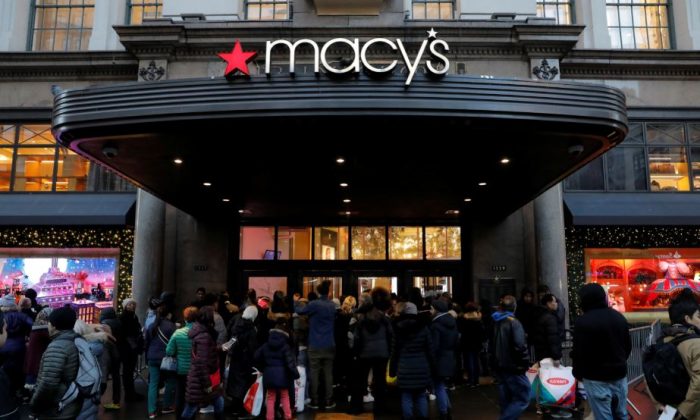 Macy’s Inc. shares plunged 18 percent on Jan. 10 after the department store operator slashed its full-year profit and sales forecast on the back of an anemic holiday season, sending a chill through the wider retail sector.

Macy’s said its sales slowed after a good start to the holidays, and flagged particular weakness in women’s sportswear, sleepwear, fashion jewelry, fashion watches, and cosmetics. Its comparable sales over the critical November and December months rose 1.1 percent.

Department stores in recent quarters had shown signs they were finding ways to cope with declining mall traffic and tough competition from online seller Amazon.com Inc. A robust economy and strong consumer spending had been expected to offer further relief.

Kohl’s Corp. reported similarly muted comparable sales growth for the holidays, sending its shares down as much as 9 percent. Target Corp. was down nearly 4 percent even after the retailer posted relatively strong holiday sales growth of nearly 6 percent.

Those results come as overall sales for the 2018 U.S. holiday shopping season hit a six-year high as shoppers were encouraged by early discounts, according to a Mastercard report in late December. But some are already calling for an industry-wide slowdown this year.

“It looks like the consumer is in good shape but generally there are signs of some slowing in the economy,” said Ken Perkins, founder of research firm Retail Metrics.

Consumer confidence in 2019 is seen as likely to be strained by rising U.S. interest rates, the ongoing trade spat with China, market volatility due to concerns over global growth and political deadlock in Washington.

A recession could hit many department stores particularly hard, some industry watchers said.

“If we do get a recession, the retailers that can offer strong value in both physical bricks-and-mortar format, as well as a good online experience will do best,” said Jeff Yastine, senior equities analyst at investment advisory firm Banyan Hill Publishing.

“That leaves many department store chains, like Macy’s, on the outside of this trend until they can figure out how to marry ‘luxury’ with the convenience of online retail that consumers want,” he said.

The retailer is now calling for diluted earnings per share of $3.95 to $4.00 for fiscal 2018, excluding settlement charges, impairment, and other costs. Its previous guidance issued in November called for EPS of $4.10 to $4.30.

“The holiday season began strong—particularly during Black Friday and the following Cyber week, but weakened during the mid-December period and did not return to expected patterns until the week of Christmas,” Jeff Gennette, chairman and chief executive officer at Macy’s, said in a statement.

The retailer has reported four consecutive quarters of same-store sales growth, and its shares had risen more than 80 percent over a 12-month period heading into Thanksgiving.

Kohl’s reported comparable sales growth of 1.2 percent during the final two months of 2018, down sharply from 6.9 percent a year earlier.

Target was a bright spot with comparable sales growth of 5.7 percent during November and December, up from growth of 3.4 percent in the same period last year, but its performance on Jan. 10 was overshadowed by its rivals.

Target said its sales were helped by higher customer visits and strong online sales during the holiday season, as well as strength in with toys, baby and seasonal gifts. It expects same-store sales growth of about 5 percent for the fourth quarter through January.

Target reaffirmed its full-year earnings and sales forecast, putting it on track for its fastest full-year comparable sales growth since 2005.