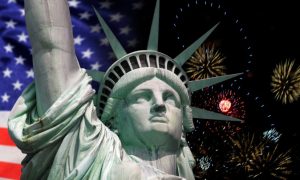 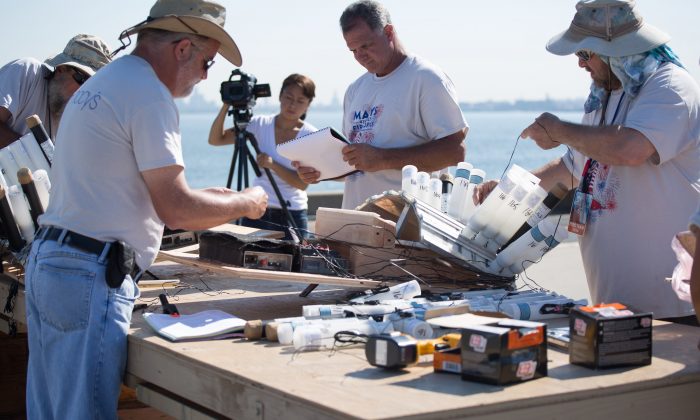 Pyrotechnicians prepare the wiring for the fireworks that will be used in Macy’s 4th of July fireworks on a barge in Staten Island, in New York City, on June 28, 2014. (Laura Cooksey/Epoch TImes)
New York

NEW YORK—Macy’s Fourth of July Fireworks won’t be the biggest ever this year. They actually will be considerably smaller. Still, the man who planned this year’s spectacle had a big reason to make it the best ever—and it all swirls, spins, and revolves around the bridge, and his family’s history.

After five years of putting on the show mainly for Manhattan and, well, New Jersey, Macy’s moved the show from the Hudson River back to the East River. But there’s another benefit to the move, besides satisfying the outer boroughs—after almost two years of planning and negotiating—the city finally granted permission to use the Brooklyn Bridge as one of the launching locations for the fireworks.

One of the masterminds behind the plan is Gary Souza, producer of the show and vice president of Pyro Spectaculars by Souza, a California-based family company that’s been putting on the New York fireworks for the past 30 years.

“This was something that was meaningful to my family,” said Souza, who works as a physical therapist when he is not designing fireworks shows. “There’s just a little bit of pride there.”

But moving to the East River, especially the rather narrow part around the bridge, created quite a challenge for Souza. “You have to consider the fallout zone, the safety zone,” he said.

While last year he could easily shoot huge fireworks 1,200 feet in the air, now he’ll have to make do with smaller ones, flying some 600 feet high.

“We had to really tone things down,” Souza said, noting this year’s show will consists of “lower, wider, and sort of in-range fireworks that were specially designed for that type of a venue.”

Yet, what may be lost on massiveness will be made up for by uniqueness.

“We’ve been given a blessing to decorate one of the great icons in America on America’s Independence Day, so we’re very excited about that,” Souza said. “Fireworks that we’re putting on the bridge were specifically made for this show.” The bridge will become a “key element” five or six times during the 30-minute presentation.

The Art of Fireworks

Conceiving one of the hugest fireworks displays in the world is an intricate and almost magical process. “It’s really hard to articulate how that happens,” Souza said.

First, he needs to pick the right music. His method is to compose the lighting effects in his mind while listening to the music. This allows him to “capture the feeling.”

“It’s almost like having videos in your brain,” he said. An engaging fireworks show unfolds like a theater play or a dance performance.

“It’s the color, it’s the duration, it’s the passion, the feeling, as well as the movement and misdirection, like magic,” Souza said. “You need to create action and movement. Then you bring it all back together again and make it all one unit and it’s like ‘Wow!’ … That’s what’s going on in my brain.”

Then the technical part comes in. Each song is broken down into segments, and content is planned for each one. “If it’s 28 seconds, I need five bursts of that, four bursts of this,” Souza said. In the end, the team spends hours programming the digital firing system to achieve nearly perfect synchronization with the music.

Correction: The article was updated to reflect that the show will be 30 minutes long.