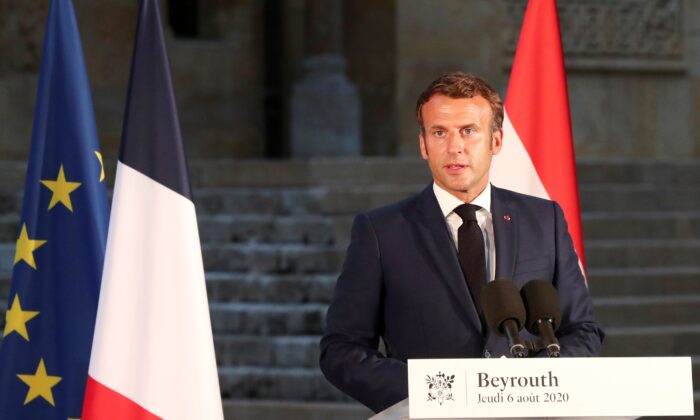 French President Emmanuel Macron will host U.S. President Donald Trump and other political leaders on Sunday for a U.N.-endorsed donors’ conference by video to raise emergency relief for Lebanon following this week’s massive explosion in Beirut. U.N. Deputy Secretary-General Amina Mohammed is co-organizer of the meeting.

Lebanon was already mired in deep political and economic crisis when the blast ripped through its main port on Tuesday, killing 158 people, injuring more than 6,000, and destroying a swathe of the city.

The cost of rebuilding Beirut could run into the billions. Economists forecast the blast could wipe up to 25 percent off of the country’s GDP.

Many Lebanese are angry at the government’s response and say the disaster highlighted the negligence of a corrupt political elite. Protesters stormed government ministries in Beirut and trashed the offices of the Association of Lebanese Banks on Saturday.

Macron visited Beirut on Thursday, the first world leader to do so after the explosion, and promised the Lebanese people humanitarian aid would come but that profound political reform was needed to resolve the country’s problems and secure longer term support.

“I guarantee you, this (reconstruction) aid will not go to corrupt hands,” Macron told the throngs who greeted him.

There has been an outpouring of sympathy for Lebanon from around the world this week and many countries have sent immediate humanitarian support such as a medical supplies.

Trump will participate in the video-link conference.

…We will be having a conference call on Sunday with President Macron, leaders of Lebanon, and leaders from various other parts of the world. Everyone wants to help!

Germany will commit an additional 10 million euros ($11.79 million) in emergency aid on top of the rescue contributions already underway, its foreign minister said.

Representatives of Britain, the European Union, China, Russia, Egypt, and Jordan are expected to join the conference, hosted by Macron from his summer retreat on the French Riviera.

“I’m touched by the bravery of the Lebanese people who have been hit by this tragedy in an already difficult context. The EU is a long-standing friend and partner. We are in full solidarity with Lebanon more than ever in these difficult times.”

The EU said it has mobilized 33 million euros ($38. 90 million) for emergency needs and more than 250 rescuers from European Member States are on the ground.

During his visit, Michel stressed the importance of political reform in Lebanon.

“Local political forces should seize the opportunity and unite around a national effort to respond to the immediate needs but also more long term challenges the country is facing. It’s of critical importance for Lebanon to implement the fundamental structural reforms. The Lebanese can count on the European Union in this effort—but internal unity is key.”

He also called for concrete steps to reform the financial system and to adopt anti-corruption measures, a EU statement said.