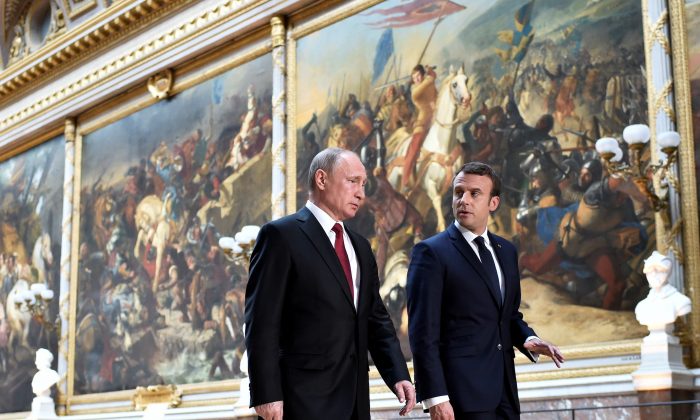 French President Emmanuel Macron told a French newspaper on Sunday that he hopes for a “historic solution” to the Ukraine–Russia crisis as he heads to Moscow for talks with Russian President Vladimir Putin, but a Kremlin spokesperson sought to temper expectations, saying no big breakthrough is expected.

Macron told the Journal du Dimanche newspaper that he believes Putin is open to talks on defusing tensions that have been ratcheted up in recent weeks as Western leaders have expressed concerns that a Russian troop buildup near Ukraine’s border is setting the stage for an invasion.

“We are in the window,” Sullivan told the outlet. “Any day now, Russia could take military action against Ukraine or it could be a couple of weeks from now, or Russia could choose to take the diplomatic path instead.”

Macron, who will meet Putin on Monday before heading to the Ukrainian capital Kyiv for talks with Ukrainian President Volodymyr Zelensky, said his aim is to prevent the tensions from escalating into a military conflict.

“The intensity of the dialogue we have had with Russia and this visit to Moscow are designed to stop that happening,” Macron told the newspaper, adding that he believes Putin’s objective was “not Ukraine, but a clarification of the rules … with NATO and the EU.”

Russia has denied any plans of attacking Ukraine and has asked the United States and its allies for a binding commitment that they won’t accept Ukraine into NATO. Zelensky has pushed for his country’s admission into the military alliance.

The Kremlin has also asked the United States and its allies to promise not to deploy offensive weapons and to roll back NATO deployments to Eastern Europe. Washington and NATO have rejected those demands.

“From our perspective. I can’t be more clear—NATO’s door is open, remains open, and that is our commitment,” U.S. Secretary of State Antony Blinken said in late January, though he renewed an offer of “reciprocal” measures to address mutual security concerns between Russia and NATO, including missile reductions in Europe.

While Putin has signaled Moscow’s readiness for more talks with Washington and its NATO allies, Kremlin spokesperson Dmitry Peskov told reporters on Monday that he doesn’t expect a single meeting between the Russian leader and Macron would lead to a major breakthrough.

“The situation is too complex to expect decisive breakthroughs in the course of one meeting,” Peskov said.

Macron, while hopeful for a diplomatic resolution, also appeared to temper expectations.

“Will discuss the terms of deescalation. We have to be very realistic. We will not obtain unilateral gestures, but it’s essential to stop the situation deteriorating,” Macron told Journal du Dimanche.

Macron added that he had “always been in a deep dialogue with President Putin and our responsibility is to build a historic solution” to the issue of European security.

“I believe President Putin is available for this,” Macron said.

Peskov said Macron’s visit was preceded by three phone calls, describing Macron’s visit as “very significant,” and added that he looks forward to a “very substantive and lengthy discussion” between the two leaders.

The talks between Macron and Putin are expected to kick off at around 5 p.m. Moscow time.

In a separate diplomatic effort, German Chancellor Olaf Scholz is set to travel to Kyiv and Moscow as part of a bid to defuse tensions.