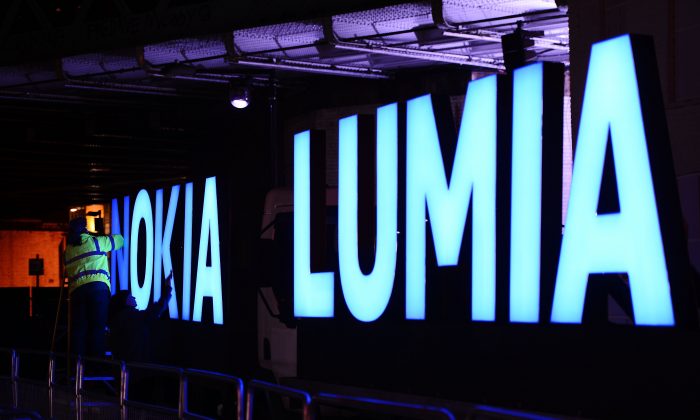 The Lumia 730, which will supposedly run Windows 8.1, is codenamed “Superman,” and is understood to be the replacement for the Lumia 720.

With a 5 megapixel front camera and a 4.7-inch display, the Lumia 730 is targeted at the “selfie market.”

The phone’s on-screen keys and bright color scheme also make it a likely successor of the Lumia 63x, Lumia 930, and Lumia 1520 series.

Neither Nokia nor Microsoft have officially announced the phone yet.

See an AP update on Nokia below.

HELSINKI (AP) — There is life after mobile phones for Nokia.

Shares in the Finnish wireless equipment maker surged Thursday after it reported higher profits and an improved earnings outlook in the wake of the sale to Microsoft of its troubled handset division.

The Finnish company said its second-quarter profit rose 20 percent to 213 million euros ($285 million) on the back of improved profitability of its key networks unit. Net sales in the April to June period fell to 2.9 billion euros from 3.2 billion euros in the same period last year, mainly due to divestments and currency fluctuations at the networks gear unit.

Nokia Corp.’s stock closed up 7.3 percent at 6.14 euros on the Helsinki Stock Exchange.

Chief Executive Rajeev Suri said the result “shows the strength of the company today” as the Finnish firm has restructured and adopted a new business strategy after completing the sale of its mobile phone unit to Microsoft in April.

Suri gave an upbeat outlook for the core networks unit which now accounts for around 90 percent of Nokia’s revenue. He said the unit’s full-year 2014 operating margin was expected to be “at or slightly above” the long-term target of 5-10 percent, an update to the previous forecast.

“Our expectations for the full year 2014 have improved,” said Suri, who took over as Nokia’s CEO on May 1.

Indian-born Suri, who has worked at Nokia since 1995, has been largely credited with turning the company around as the former head of the Nokia Solutions and Networks unit. He reiterated that the revenue of the Networks unit was expected to grow during the second-half of the year.

Chief Financial Officer Timo Ihamuotila said in an interview with Finnish national broadcaster YLE that the networks unit – a major provider of the next generation 4G wireless networks – has done particularly well in boosting market share in China, Japan, South Korea and the United States.

“Nokia is now a strong and a profitable company,” Ihamuotila said, pointing to the company’s net cash reserves of 6.5 billion euros, which more than tripled from the end of March, before the closing of the 5.44 billion-euro handset unit deal with Microsoft.

Nokia is determined to grow also in two of its other remaining businesses – software and maps. The company said it was seeing particularly good growth in the automotive business for the HERE location-services and map unit. Among Nokia’s map-technology clients are Amazon.com, Microsoft, Yahoo Inc. and providers of car-navigation systems.

Nokia employed 56,600 workers worldwide at end of the quarter.