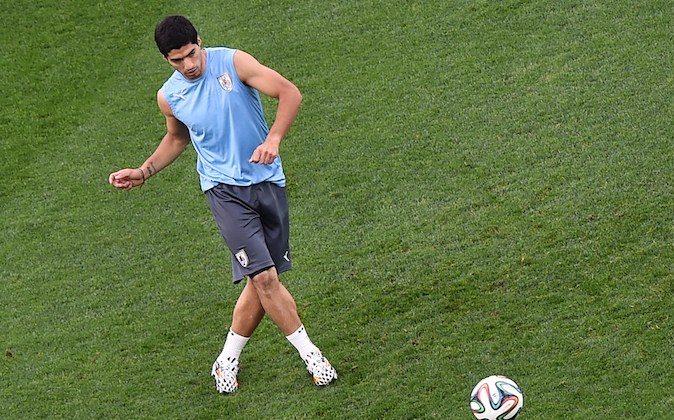 Uruguay striker Luis Suarez has said that he is fully fit to face England.

The Liverpool player had a knee operation a few weeks before the World Cup to fix some meniscus damage.

Uruguay coach Óscar Tabárez decided to bring Suarez to Brazil, however, and so far, the forward has been only fit enough to make the bench in Uruguay’s 1-3 lost to Costa Rica last Saturday.

Suarez has been going through rehab, and has recently said that he is “100 percent” ready and has “great desire to help [his] teammates.”

The Liverpool man also added that since he knows all 23 members of Roy Hodgson’s England squad “either because they’re my teammates or because I’ve faced them,” he knows “some defensive flaws [Uruguay] can exploit.”

Here is an Associated Press article on England and Uruguay.

RIO DE JANEIRO (AP) — With their World Cup fates already in jeopardy, Uruguay and England will be counting on their unpredictable strikers to revive their campaigns in Sao Paulo on Thursday.

Luis Suarez is preparing to return from Uruguay’s treatment room and hoping his scoring abilities have not been impeded by injury. Wayne Rooney, England’s one-time teenage prodigy, will be seeking to prove his critics wrong by finally scoring at the pinnacle of international football.

Uruguay and England desperately need their star forwards to deliver after both teams made a losing start to their World Cup campaigns.

England was seen as a gallant loser in Group D on Saturday, showing a real willingness to attack but still going down 2-1 to Italy. On the same day, Uruguay, a favorite after reaching the 2010 semifinals, was unexpectedly ripped apart in a 3-1 defeat by Costa Rica.

Suarez was forced to endure Uruguay’s desolation from the bench, but has declared himself fit following knee surgery, and will be eager to make an impression on the tournament.

A controversial figure, the Liverpool striker has caused outrage in England for incidents that led to two lengthy bans, one for racism and the other for biting an opponent. Before those, Suarez was condemned at the 2010 World Cup for a cynical handball on the goal-line that allowed Uruguay to advance to the semifinals.

Liverpool teammate Daniel Sturridge, who could be leading England’s strike force, wouldn’t break the rules like that.

“We don’t like to cheat to win. We want to play in an honest way,” Sturridge said in response to a general question about Uruguay. “I’m going to do anything in my power to win this game, provided it’s within the rules of the game, but I’m not going to dive and I’m not going to handball a goal shot because it’s not in my nature.”

“I know all the players in the England squad either because they’re my teammates or because I’ve faced them,” Suarez said. “They have some defensive flaws we can exploit.”

It didn’t need intelligence from Suarez for coach Oscar Tabarez to know that. For all the English were stirring in attack against Italy, they looked susceptible in a defense lacking tournament veterans. Video analysis of Suarez and his teammates has been on the agenda at the England camp this week.

How sharp Suarez will be in front of goal, though, remains uncertain after more than a month on the sidelines. Uruguay could be left relying on Diego Forlan, who was voted the 2010 World Cup’s top player but is now 35, and Edinson Cavani, who cost Paris Saint-Germain $84 million last year but could only score a penalty against a Costa Rica side ranked 28th in the world.

Perhaps Uruguay’s fixation on the progress of Suarez’s recovery is only matched by England’s concern over Rooney’s failure to score now at a third World Cup. Shunted out of position on the left wing, Rooney was denied his favored central role by Daniel Sturridge.

Amid scrutiny from pundits, players and managers, England midfielder Frank Lampard lamented the fact that a “furor has been built up around” Rooney.

“Take Wayne’s name away and you look at his performance and his work rate and the ball he put in for the goal and people might look at it differently,” Lampard said Tuesday. “Here we are dwelling on something we don’t need to look for. It’s about a team performance … so I think we do need to drop the agenda and look at the team.”

Rooney was spotted training with the backup players on Monday, which was interpreted in British newspapers as a sign he could be dropped against Uruguay. The Manchester United forward maintained on Tuesday that he was just putting in extra scoring practice.

“I said from the start I want to do everything I can to make sure I’m ready for these World Cup games and as part of that I was doing extra training a week before the squad joined up,” Rooney wrote on Facebook. “That’s exactly what I did yesterday, my own extra training because that’s what I wanted to do.”

Now Rooney has a point to prove at the Itaquerao Stadium in Sao Paulo. Just like Suarez.