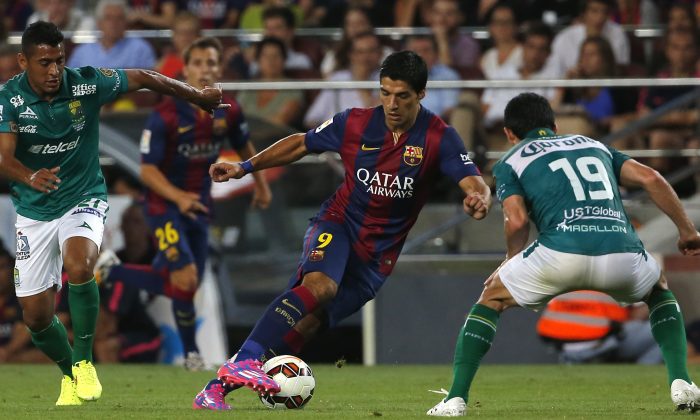 New Barcelona striker Luis Suarez finally made his debut in a friendly match against Leon.

The 27-year-old Uruguayan international came on in the 76th minute to replace left back Jordi Alba.

Suarez did not score in the friendly, although Neymar marked his return with two goals.

Check out a video of Luis Suarez’s Barcelona debut, and the match highlights below that.

See an AP article about Suarez and Neymar below.

BARCELONA, Spain (AP) — Luis Suarez and Neymar played their first match since their memorable exits from the World Cup on Monday, with the Brazil star scoring two goals to help Barcelona rout Mexican champion Leon 6-0 in a preseason friendly at Camp Nou.

The last time Suarez played he infamously bit an Italian opponent at the World Cup, earning him a four-month ban from competitive matches.

Suarez, who has since transferred to Barcelona from Liverpool, was cheered by his new fans during the team’s presentation and went on as a substitute in the 75th minute to another round of applause.

Neymar hadn’t played since fracturing a vertebra during the World Cup on July 4, ruling him out of the rest of the tournament. He was deemed fit to play hours before the friendly.