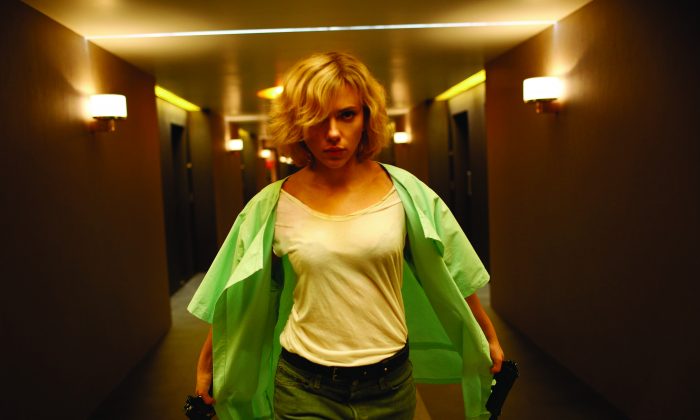 “Life was given to us a billion years ago. What have we done with it?” intones Scarlett Johansson’s voice at the start of “Lucy.” Good question. Easy answer. We’ve turned Hollywood into a superhero movie-factory.

Now add “Lucy.” Note: This is Scar-Jo’s second supernormal ability role to date. This one’s a much better role than the other one. She actually gets to act. “Lucy” is definitely on par with an “Avengers” movie—it’s a very decent action film.

Lucy’s a college student with a flaky boyfriend who suddenly handcuffs her to a metal briefcase, forcing her to do the dirty drug delivery he’s dodging.

The electric-blue drug is called CPH4. What does it do? They test it on a hapless individual dragged from the next room. He screams, froths, and laughs himself half to death.

CPH4 is not a normal party-party drug. It’s partially biological, a synthetic mother’s-milk component that facilitates fetal bone growth, among other things. From a scientific point of view, it rapidly alters brain cells.

They send her on her merry way. One of the thugs on the reception end thinks maybe he’ll party a bit with Lucy, but she’s not having any of that. Which earns her a vicious rejection beat-down, which causes CPH4 leakage into her bloodstream.

We get a little taste of things to come: The initial seepage of drugs into Lucy’s system produces immediate, explosive, bad-guy butt-whupping payback—an authoritative announcement that there’s a new non-Marvel superheroine in town. It’s marvelously satisfying. The payback, that is.

This is, after all, director Luc Besson, who gave us “La Femme Nikita” and “Léon: The Professional.” Besson’s got a penchant for portraying beautiful, behind-kicking babes.

She Blinded Him With Science

Cut to Paris. Morgan Freeman plays Professor Norman. He’s a scientist. Professor Norman says things like, “Two neurons, and you’re moving.” One hundred billion neurons exist in the human body. That’s more stars than in the galaxy. “As above, so below?”

Norman touches on prehistoric culture, stating that the pre-microscope Greeks and Indians all knew about cells. He says we use 10 percent of our brains while dolphins, using 20 percent, evolved biological sonar so sophisticated that no science can match it.

And then it’s back to Lucy running around, trying to make sense of her brave new world, trying not to die of an overdose, and trying to stop the other drug mules from unleashing CPH4 on the European population.

By this time, we’ve gotten used to interspersed Tree of Life-type images, miraculous galactic panoramas, cell division scenes, and “Animal Planet”-type hunting footage. These serve to comment on the narrative in a sort of visual Greek chorus fashion, mostly comedic in tone, sometimes slightly ham-fistedly. However, it’s easily forgiven. Why? Because this movie really moves.

Basically what’s being suggested by these intercuts is that humans are still evolving. Lucy’s just evolving at warp speed.

So how does she evolve? Partially with the device of using the movie screen as a series of giant cue cards showing percentages, like we’re all 8 years old.

At 20 percent, Lucy’s clairaudient and acting a little robotic. She’s seeing the illuminated qi-flow of tree roots. At 30 percent, she feels all human emotions fading away.

At 50 percent, she’s coughing up teeth on a plane and growing new ones.

At 60 percent, she’s seeing skeins of cellphone data in another dimension, reading it, and figuring out where the other drug mules went (Rome, Paris, London).

Somewhere in these high percentages, things get a little too similar to Johnny Depp’s character in “Transcendence,” where he morphed into mobile, self-perpetuating nanotechnology. Only in “Lucy,” it’s all biologically based.

The result, however, looks similar, with fantastically blossoming black goo sucking up computer info, gobbling everything in sight, and kicking us around various parallel dimensions, including a quick tribute to the white-space dimension of “The Matrix.”

All in all, the action’s fun, the science is of the cinematic variety, and the violence borders on blood-spatter queasy, à la the ultra-gratuitous “Savages.”

What to make of this recent explosion of supernormal ability movies? Again, the answer is easy: Marvel and DC comics have around 200 superheroes each. There’s money to be made in Hollywood. Better get used to it.

It’s not Hollywood’s fault; it’s supply and demand. We’re the ones demanding all this supernormal-ness. Are we all developmentally arrested? Well, that too, but the real reason appears to be that our deepest yearnings are emerging. Clamoring, even.

As Professor Norman says, humans, up until now, have been more focused on “having” than “being.” By the look of it, that focus appears to be shifting. We’re drawn to the movies to dream of being like Lucy and developing our brain’s potential to function at 100 percent.