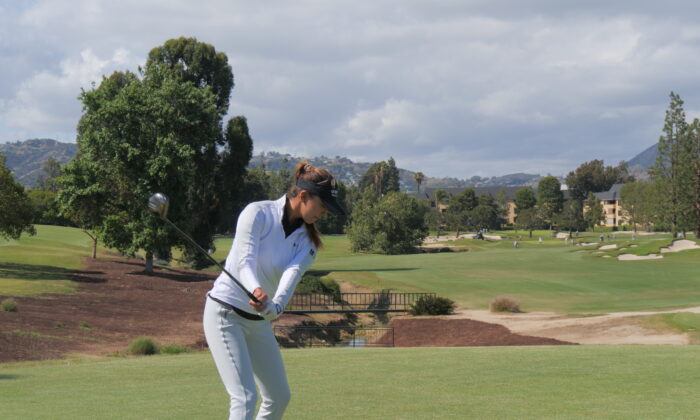 Los Angeles—In the opening round of the LPGA DIO Implant L.A. Open, southern California native Alison Lee overcame the difficult afternoon conditions to take the lead with a bogey-free round of 66, five-under, at Wilshire Country Club in the heart of Los Angeles.

Being one of seven in the field that played college golf at nearby UCLA, Lee explained her advantage at this event as “more than (just) the golf course, being in LA again and being able to see my friends and family. It’s just been awesome and I just feel so comfortable and at home.”

For her 2013-14 season at UCLA, Lee won the inaugural ANNIKA Award, given to the nation’s top collegiate female golfer.

“Being here definitely reminds me of college days back in 2013–14, when we would come here and practice in the morning,” added Lee.

Lee received the Pac-12 Player and Freshman of the Year awards following her victory at the 2014 Pac-12 Championship. She also competed in the 2014 Curtis Cup finishing with a 3–1–1 record.

As an amateur, Lee played in five LPGA events with her best finish tied for 26th at the 2009 U.S. Women’s Open; and would quickly earn a spot on tour after sharing co-medalist honors at the 2014 Qualifying School.

“It’s been tough, having to go back to Q-school a couple of times losing my card, even at the beginning of last year not having full status,” said Lee. “I actually had to (qualify on) Monday into this event last year.”

Lee’s excellent ball-striking and putting resulted in five birdies on the day; at the par-four holes 6 and 16, par-three holes 7 and 12, and at the par-five 15th.

The first birdie came on the sixth hole, with a “hole-out” from the green side bunker. Lee would also hit the flagstick on her approach at hole 14.

“So coming back full circle now … It honestly feels great, and I didn’t think I’d ever be able to make it back here,” added Lee. “So I’m just really grateful. I’m thankful for everyone around me that supports me and really believes in me, and I feel like that’s what pushed me to practice and work hard.”

Weather forecasts showed a storm likely to arrive late Friday. The late tee times in the first round saw normal windy conditions increasing throughout the afternoon, but the unusually cool temperatures dropped into the low 60s nearing sunset.

Tied for second with a first round score of 67, are Emma Talley, Nasa Hataoka (Japan), and Emily Krisinte Pederson (Denmark); they will tee off in the afternoon Friday.