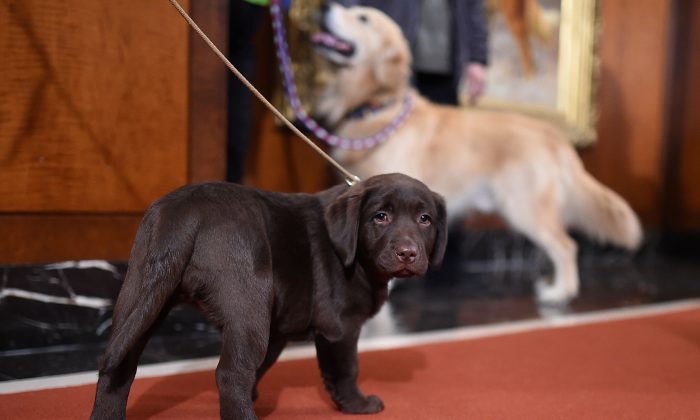 File photo depicting a Labrador retriever at the headquarters of the American Kennel Club in New York City on Feb. 22, 2016. (Jamie McCarthy/Getty Images)
US News

Two loyal dogs saved a Florida woman’s life by running to a neighbor’s home for help after their owner had a stroke.

Maureen Hatcher collapsed at her home in St. John’s, Florida, on Dec. 3, while taking a shower.

Bella and Sadie—both Labrador retrievers—rushed next door to prompt neighbor Alexandra Naspolini to check on the distressed Hatcher.

Hero pups save their owner from a stroke in St. Augustine! Catch the story only on @FCN2go at 6:00. pic.twitter.com/PVPlnH7arE

For an unexplained reason, on the day she had the stroke, Hatcher departed from her usual practice of locking the front door with a deadbolt. The dogs were thus able to get out by pulling down on the handle.

The sound of barking can be heard on the video, with the dogs raising the alarm on what they must have sensed was an emergency.

The video, obtained by First Coast News, shows the moment the two dogs dart out the front door and round the corner of the garage.

In another unusual turn of events, Naspolini said she had broken with her usual routine and happened to be at home.

“I usually am very routine, but that day, I didn’t do my usual,” Naspolini said. “I was sitting on the floor drinking coffee and saw [one of the dogs] outside.”

“Then I heard the other dog from [Hatcher’s] house barking.”

A few frames later in the video, Naspolini appears on camera. She appears to be walking hunched over, perhaps as if holding the collars of the dogs, which are not visible on camera.

Naspolini cautiously opens the door to Hatcher’s home and calls out “Excuse me,” before ringing the doorbell. The footage then shows her going inside.

Naspolini told First Coast News reporters that the dogs led her to Hatcher, who had lost consciousness and was lying on a bed.

According to the National Institute of Neurological Disorders and Stroke cited by Medline Plus, an ischemic stroke—which is the condition later found to have afflicted Hatcher—is caused by a blood clot that blocks the brain’s blood vessels. Symptoms can include sudden numbness or weakness of the face, arm, or leg—especially on one side of the body. People suffering an ischemic stroke are advised to seek urgent medical attention.

Hatcher’s symptoms included confusion, trouble speaking, and weakness on one side of her body. Naspolini immediately called 911 and, according to the St. Augustine Record, paramedics arrived about 10 minutes later.

The video cuts to two paramedics wheeling Hatcher out on a stretcher, taking her to the ambulance.

Naspolini told reporters that as St. Johns County Fire Rescue personnel were loading Hatcher into the ambulance, both dogs were still showing signs of distress.

“They are very protective of her,” Naspolini said, and added that she held the dogs up so they could see their owner.

“When the brain is deprived of blood, cells die and permanent brain injury can occur. Timing is everything,” Aghaebrahim said, noting that about five hours had passed since Hatcher’s initial fall in the shower. “One of the most important factors that can lead to a good outcome for patients in these situations is to get the blood vessel opened quickly and successfully.”

Three days later, Hatcher had regained her strength and was home again, with her pups.

“I am blessed I don’t have any residual effects, and I attribute that to Dr. Nima and what the staff there did for me,” Hatcher said while saying she feels blessed her “angels,” Bella and Sadie, were there to save her.

The National Institute of Neurological Disorders and Stroke (NINDS) describes strokes as a medical emergency.

“Strokes happen when blood flow to your brain stops. Within minutes, brain cells begin to die.”

The NINDS states that the more common kind of stroke is the ischemic stroke, which is caused by a blood clot that blocks or plugs a blood vessel in the brain.

The less common kind is called a hemorrhagic stroke. It’s caused by a blood vessel that breaks and bleeds into the brain.

Acute stroke therapies try to stop a stroke while it is happening by quickly dissolving the blood clot or by stopping the bleeding.