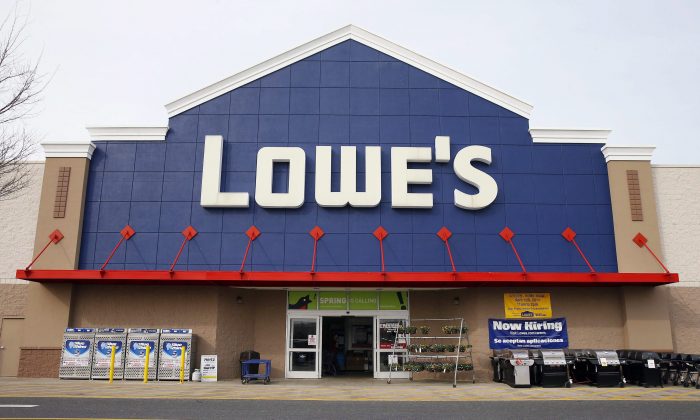 A Lowe's store in Philadelphia in a file photo. (The Canadian Press/AP/Matt Rourke)
Companies

American retail company Lowe’s is handing out $55 million in bonuses to its front-line hourly employees in an effort to help combat the increasing cost of living.

“I would like to personally thank our associates for their hard work and dedication. In recognition of some of the cost pressures they are facing due to high inflation, we are providing an incremental $55 million in bonuses to our hourly front-line associates this quarter,” Ellison said on the call.

“These associates have the most important jobs in our company, and we deeply appreciate everything they do to serve our customers to deliver a best-in-class experience,” Ellison added.

For a designated time period, the company is also providing workers with an additional 10 percent discount on everyday household and cleaning items, meaning they can now purchase those products at a 20 percent discount.

Executive Vice President Joe McFarland said he hopes the added discounts will also help to “ease the burden of inflation impacting many of these items.”

“We will continue to look for meaningful ways to improve our associates’ work-life balance while providing them with the tools to build a career at Lowe’s,” McFarland said.

Steve Salazar, a spokesperson for Lowe’s, confirmed to The Washington Post that employees at the company will see the bonus on Sept. 9, and it will be taxed.

Lowe’s operates or services 2,200 home improvement and hardware stores and employs approximately 300,000 people, according to its official website.

The $55 million in bonuses shared among the 300,000 employees would amount to an average bonus of roughly $183 per employee.

Lowe’s announcement comes as inflation has rocketed in the United States, prompting a string of businesses, including Microsoft, ExxonMobil, and Walmart, to offer worker bonuses, discounts, and gift cards in an effort to offset soaring prices, although it is unclear just how helpful the one-time lump sumps will be as the cost of living steadily increases.

While inflation appeared to slow down slightly in July, and gas prices have fallen from their peak of $5 per gallon in June, American households are still feeling the strain.

Earlier this week, Mike Palicz, the federal affairs manager at Americans for Tax Reform, raised concerns that the Democrat-backed Inflation Reduction Act that was signed into law by President Joe Biden on Tuesday could further increase prices for gas and electricity for consumers.

Pointing to specific taxes pertaining to crude oil and petroleum products, methane, and coal, Palicz warned that these could be passed on to consumers in the form of higher energy bills and gas prices.

Elsewhere on Wednesday, Lowe’s reported net earnings of $3 billion, in line with prior-year results. Total sales for the second quarter were $27.5 billion compared to $27.6 billion in the second quarter of 2021, and comparable sales decreased 0.3 percent.