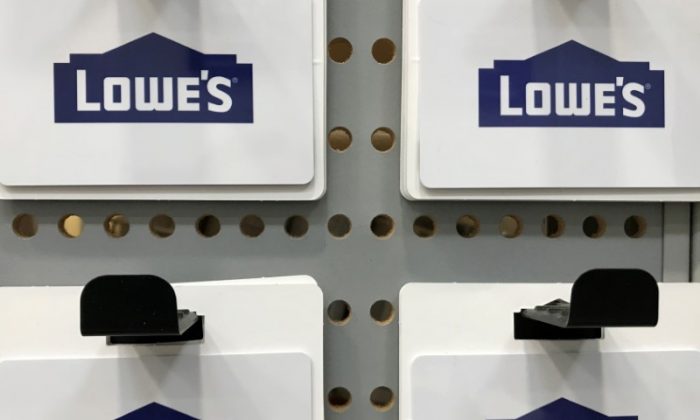 Gift cards are shown for sale inside a Lowe's retail store in Carlsbad, California, on May 24, 2017. (Mike Blake/Reuters)
Companies

Lowe’s Shuts 51 Stores in US and Canada

Home improvement chain Lowe’s Companies Inc announced the closure of another 51 underperforming stores in the United States and Canada on Nov. 5 as it strives to compete with rival Home Depot Inc in a slowing housing market.

Lowe’s gave no detail of job losses in the move, which closes stores in some upmarket areas including Broadway and Chelsea in Manhattan and follows the shutdown of 99 Orchard Supply stores in California.

Buffetted in recent quarters by the impact of a long winter in North America, Lowe’s has been striving to find ways to catch up with the long-time sector leader Home Depot, whose stores on average generate almost twice as much in sales.

There are also signs that Americans are spending less on housing as prices and demand peak after a seven-year homebuilding spree, although many of the factors underlying the industry’s health remain in place.

“The decision was informed by the strategic reassessment work we have been doing over the last few months … We plan to continue to evaluate all businesses and elements of our portfolio annually,” the company told Reuters.

While Lowe’s is far smaller and less exposed to the presence of Amazon and other online sellers, the closures follow a wave of similar moves by traditional U.S. retailers in the face of greater online competition.

New Chief Executive Officer Marvin Ellison began a restructuring after taking over in July and has said he was reviewing its real estate portfolio, promising to remove slow-selling products and end unsuccessful ventures.

“New blood in the upper ranks was clearly a catalyst for this decision, as we believe there is a greater willingness on behalf of the leadership team to examine the root causes of underperformance,” Jefferies analyst Jonathan Matuszewski, said in a note.

The company, which operates about 1,800 U.S. stores and 300 in Canada, said it expects the closures to be completed by February, with the exception of some U.S. stores that are closing immediately.

The 20 U.S. closures are spread across states including New York, Texas and California, with 31 locations including two plants in a handful of Canadian provinces also shutting.

The majority of the impacted U.S. stores are located within 10 miles of another store.

Shares in the company were flat.