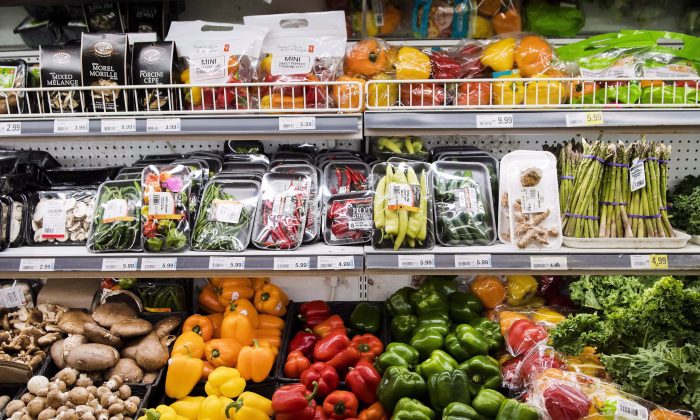 Produce is shown in a grocery store in Toronto in this file photo. Anemic spending by lower-income households on food was one reason for lower-than-expected inflation in the post-2012 economic recovery. (The Canadian Press/Nathan Denette)
Economy

Since the financial crisis, major central banks have been struggling to raise inflation, but a study by the C.D. Howe Institute explains that for Canada, uneven economic growth across industries and the spending patterns of the lower-income brackets have caused systematic divergences from analysts’ inflation projections.

As central banks slashed interest rates to historic lows and embarked on large-scale bond purchases to spur inflation and economic growth, the inflation they sought ended up in stocks and real estate, not food and clothing. The beneficiaries of these central bank actions were the wealthier households that owned assets, while lower-income households fell further behind.

The C.D. Howe Institute study “Inflation after the Crisis: What’s the Story?” shows that when inflation doesn’t behave as projected, one important reason has to do with whether economic growth is well-spread across the country or concentrated in a smaller set of industries.

The report explains that inflation should have risen further in the post-2012 period but didn’t because the economic rebound was narrowly concentrated and it advantaged the higher-income brackets. The sectors that dampened inflation were those in which lower-income households typically spend a higher percentage of their income compared to higher-income households—food, clothing, alcohol and tobacco, and pet expenses.

The study also focuses on the late 2009 to the end of 2011 period when the Canadian economy was slumping, yet inflation did not fall as much as expected. The sectors that expanded during those years that kept prices from dropping were very different from those of the post-2012 period. They did not include food and clothing—the sectors heavily influenced by the spending of lower-income households.

“The robustness of this link suggests that the industry makeup of economic growth matters for inflation behaviour, and as a result, matters for monetary policy,” said study co-author Farah Omran in a press release.

By adjusting interest rates, major central banks aim to keep inflation at its 2 percent target. The Bank of Canada states that by keeping inflation low, stable, and predictable, it can foster confidence in the value of money and contribute to sustained economic growth.

According to the C.D. Howe study, however, “In Canada’s case, inflation has averaged 1.56 percent since 2012, well below the Bank of Canada’s 2 percent target.”

The impact of technology has often been thought to have a dampening effect on inflation, but the Bank of Canada said in late 2017 that the impact is minimal. Due to the small effect of e-commerce, the “Amazon effect” has only had a small disinflationary impact.

However, cost-efficient technologies should normally lead to greater productivity and thus put downward pressure on inflation, as the economy has more room to grow.

“New digital technologies could be giving the economy more room to grow before inflation pressures emerge,” said Bank of Canada governor Stephen Poloz in a September 2018 speech in New Brunswick.

Inflation, measured as the price increase in consumer goods, is often affected by transitory factors like a period of high gasoline prices, but central banks attempt to understand its underlying trend. The Bank of Canada uses three measures of core inflation that filter out noise from temporary factors.

On July 17, Statistics Canada reported inflation of 2.0 percent over the last year, down from 2.4 percent a month ago, as consumers paid 9.2 percent less for gasoline in June.