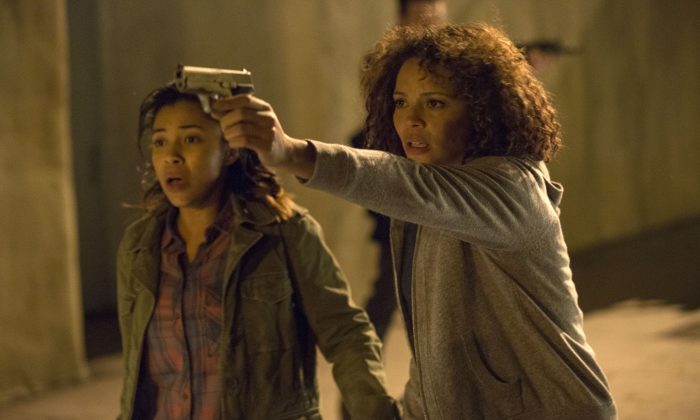 Fliers about a real-life “Purge” happening on Friday in Louisville have gotten the attention of residents and police. Similar fliers have appeared in Jacksonville and Miami in Florida.

The fliers are being circulated throughout the city and a number of people have contacted police.

The Purge and its recent sequel are movies that are set in a United States that legalize any crime for 12 hours every year, a period known as the “Purge.” The only rules are that no high government official can be murdered and the other is that no weapons such as rocket launchers are allowed.

The flier being circulated is in the form of a mock movie poster for The Purge that includes the text “Louisville’s The Purge,” and it says it will last from 8 p.m. on Friday through 6:30 a.m. on Saturday.

“We’re going to take any threat that we receive seriously, particularly one that encourages and incites violence against our community,” Louisville Metro Police Department Sergeant and spokesman Phil Russell told Wave3.

“We’re going to take that seriously and investigate that as thoroughly as we can.”

He added later to WHAS-11. “I think it goes back to if you see something, say something that you believe is a specific threat of violence. We would encourage you to contact us. You can do so on our anonymous tip line, 574-LMPD. We investigate all tips we receive,”

People have been voicing concerns via social media as well, with many also taking the threats seriously. “I think people are really going to come out here and be on a road rage on society and I will not come out for all the foolishness. Shoot people, rob, do a lot of the stuff that is going on,” one young woman told the broadcaster.

The threats also forced the postponement of at least one high school football scrimmage. St. Xavier was scheduled to host Simon Kenton at 7:30 p.m., but it was pushed to Saturday at 11:30 a.m. St. X coach Will Wolford said Kenton County administrators did not want the Simon Kenton team to travel to Louisville because of the purge threats circulating on Twitter and other social media, according to the Courier-Journal.

The Journal later reported that a student at duPont Manual High School, who told the school’s newspaper that he posted one of the original threats on social media. “It was originally supposed to be just a fun thing, I never thought it’d get as serious as it did,” the unidentified student told the paper. “I was really shocked the first time I saw local media covering it.”

Dwight Mitchell, a police spokesman, said the department is still investigating. “We don’t know if it’s a hoax or not,” Mitchell said.

Random violence began in Louisville earlier this year, already setting police on edge.”As a department,” Russell said, “I believe that we’re adequately prepared for anything that could arise.”

Apparently there are also threats of a Purge in Jacksonville and Miami in Florida, among other areas across the United States. The former is being made for August 31.

Jacksonville Sheriff John Rutherford caught wind of the concerns and put out a statement Wednesday evening.

“When appropriate, we will make a public response,” he said. “At this time we have no credible information to indicate that this is a legitimate threat to the city of Jacksonville.”