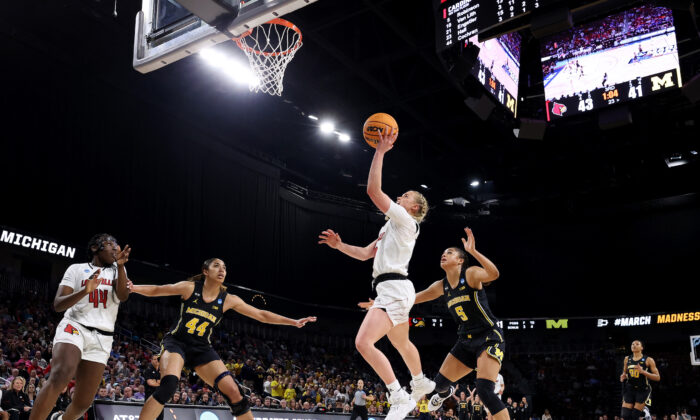 Hailey Van Lith #10 of the Louisville Cardinals drives to the basket against Laila Phelia #5 of the Michigan Wolverines during the second half in the Elite Eight round game of the 2022 NCAA Women's Basketball Tournament at Intrust Bank Arena, in Wichita, Kansas, on March 28, 2022. (Andy Lyons/Getty Images)
College Sports

The top-ranked Louisville Cardinals (29–4) of the Wichita region advanced to the NCAA Final Four in women’s basketball, defeating the Michigan Wolverines (25–7) on Monday night 62–50 to reach their fourth Final Four in the team’s history.

During his 15 years at Louisville, coach Jeff Walz has taken the Lady Cardinals from a mediocre program to the Final Four in 2009, 2013, 2018, and 2022. Louisville is consistently among the highest in attendance, and reached the finals in 2009, and 2013, but lost both times.

Louisville had beaten Michigan in their first meeting, in a blow-out in early December 70–48, through their usual brand of high-pressure defense and fast breaks from turnovers. This second matchup was much more competitive with an improved Michigan squad, able to counter with their own pressure.

The Cardinals were led again by sophomore point guard Hailey Van Lith with 22 points on 9 of 15 shooting, three rebounds, one assist, and two steals. She has scored 20 or more points in the four tournament victories with relentless energy on both ends of the court. Van Lith scored 20 versus Albany, 21 against Gonzaga, and 23 over Tennessee.

Louisville’s other top player, Emily Engstler of New York, was off, shooting just 1 of 9 and held to just five points. But Engstler still contributed greatly as usual with 16 rebounds, four assists, six steals, and a block.

Chelsie Hall picked up the slack, scoring 13 of her 15 points in the first half. Hall was 6 of 10 shooting, 3 of 4 from threes, and added four steals and two assists. Kianna Smith also contributed with 11 points on 5 of 13 shooting, three rebounds, and two steals.

The first half was relatively close but controlled by Louisville 30–27; Michigan had their only lead late in the first quarter 13–12 with Emily Kiser’s jumper with 1:55 remaining.

In Michigan’s first “Elite Eight” game, they were led by their All-American and best player in program history, Naz Hillmon. She carried the team with 18 points on 4 of 10 shooting and 11 rebounds. She was fouled repeatedly and most of her points came from free throws, where she made 10 of 13.

The Cardinals forced Michigan into 11 turnovers in the first half, while Louisville had eight turnovers. However, Louisville took greater advantage converting 14 points off of Michigan’s turnovers.

Early in the second quarter, Hall extended Louisville’s lead to 20–15 with a 3-pointer and layup in the first three minutes, before Van Lith’s layup with 4:56 left in the half gave Louisville a 26–19 lead.

Michigan clamped down on defense and got within one point with an 8–2 spurt before Smith made a layup to give Louisville a 30–27 halftime edge.

The second half was a defensive battle as both teams kept the other scoreless for stretches of over five minutes.

Louisville began the second half with a 6-0 run that included a layup by Hall to lead 38–31 at 7:52 in the third quarter.

Both teams had difficulty scoring against the intense defense, as Michigan went more than seven minutes without a field goal before Maddie Nolan’s 3-pointer to get within four at 43–39 with 1:57 remaining in the third quarter.

Louisville held a 45–43 to begin the fourth quarter, and began with the first five points which included a three-point play by Van Lith; and her putback basket made it 52–45 with 8:05 left.

Michigan held the Cardinals scoreless for more than five minutes but could only cut the deficit to two, 52–50, with Hillmon’s free throw with 5:40 remaining.

Louisville’s center, Olivia Cochran, who scored nine total; ended their drought with two consecutive layups to increase the lead to 56–50 with 1:58 left.

Cochran again scored another layup, followed by free throws from Van Lith and Engstler to close out the game on a 10-point run finishing with a 62–50 victory.

Louisville will meet season-long top-ranked South Carolina in Minneapolis on Friday at 4 p.m. ET in its attempt for a third Final, and Connecticut faces Stanford in the other Final Four match-up at 6:30 p.m.