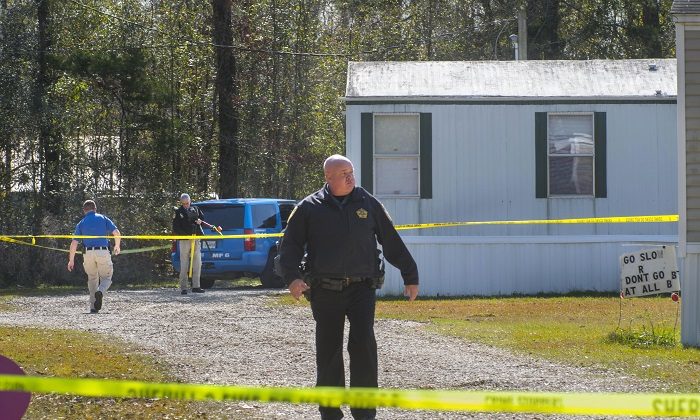 Investigators work the scene of a shooting in Livingston Parish in Louisiana. (Travis Spradling/The Advocate via AP)
Crime and Incidents

A Louisiana man accused of going on a shooting spree that claimed the lives of his half-sister and a state trooper has been released from hospital and is now in custody, authorities confirmed on Oct. 11.

Mire is facing charges of murder after shooting dead his half-sister Pamela Adair and 47-year-old Master Trooper Adam Gaubert. He is also facing numerous other charges including the attempted murder of a police officer.

Authorities said the alleged shooting spree began in a residence in Livingston Parish just after midnight on Oct. 9 when Mire entered the mobile home of a male and female and shot them both. The male victim was shot in the arm and the female sustained wounds to her leg and arm, authorities said.

“The pair tells detectives that they heard a noise outside of their home,” the Livingston Parish Sheriff’s Office said in a Facebook post on Oct. 9. “They then witnessed someone barging in through their front door and firing shots. We do not believe this to be a random shooting. It’s believed Mire was familiar with the victims.”

After shooting the male and female victims, Mire then stole a blue 2013 Chevrolet Silverado from that same neighborhood.

Three hours later at around 3 a.m., officers in the Ascension Parish area found Pamela Adair, 37, and her 43-year-old partner suffering from multiple gunshot wounds at their home in Prairieville.

Both were transported to a hospital in Baton Rouge with life-threatening injuries. Adair succumbed to her injuries while at the hospital. Her partner remains in critical condition.

Shortly after 5 a.m. Mire got into a gunfight with a Louisiana State Police Trooper who attempted to conduct a traffic stop on the blue Chevrolet Silverado in East Baton Rouge Parish.

“The driver refused to stop and shot at the Trooper,” Col. Davis said. “The Trooper returned fire and was not struck by any of the rounds by Mire.”

Death of a Master Trooper

Col. Davis noted that surveillance footage shows that at approximately 12.30 am, Master Trooper Adam Gaubert, “backed into a location on Dutton Road,” where officers “believe he was finishing a crash report and computer analysis indicated that Master Trooper Gaubert made his final entry into the database at 2.30 am.”

At 2.30 am, Mire was picked up on cameras entering the same location near Dutton Road with his headlights off, and officials believe that was where he ambushed Master Trooper Gaubert.

Gaubert was found unresponsive by a patrol unit in Ascension Parish at 5 pm the following day by a co-worker. It is unclear at exactly what time he was killed.

Meanwhile, officials continued to search for Mire and he was eventually apprehended by officers shortly after 10 pm. Davis noted that Mire had fired his weapon at officers several times before his arrest.

Mire was hospitalized to receive treatment for a K-9 bite and a suspected self-inflicted gunshot wound in his leg.

He was taken to the East Baton Rouge Parish jail on Saturday night and booked on charges of attempted first-degree and aggravated flight from an officer. He faces other charges in Ascension and Livingston parishes.

“This event has been one of the toughest events that I’ve ever had to work in my entire career. Losing a co-worker and a friend like Adam puts a hole in your heart and there’s nothing out there that can ever replace that,” Col. Davis said.

“And as bad as I’m feeling, I can only imagine what his family and his other friends are feeling, my heart goes out to them,” he added.

Officials added that the handcuffs placed on Mire when he was detained belonged to Master Trooper Adam Gaubert, who Mire is suspected of killing.

“Since the suspect was taken into custody Saturday night, he has been handcuffed. Those handcuffs are symbolic to every Trooper within LSP. Those handcuffs belong to Trooper Gaubert,” Louisiana State Police stated in a Facebook post.