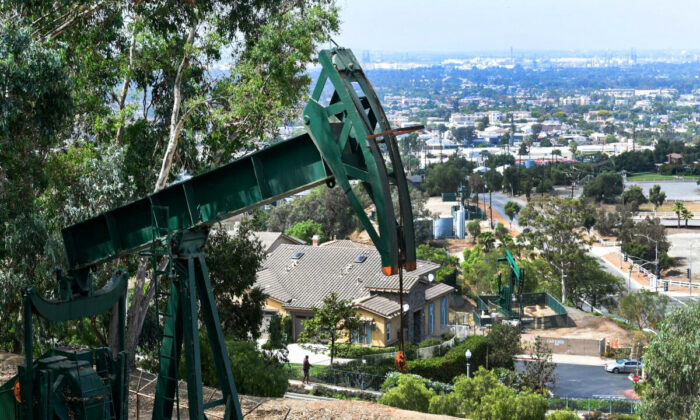 Gas and oil wells could be obsolete in the city of Los Angeles by 2027, after the city council unanimously approved a motion to draft an ordinance that bans new and existing wells over the next five years.

The motion was first introduced in December 2020 by Council President Nury Martinez and Councilman Paul Krekorian amid complaints from residents who live near the wells.

“From Wilmington to the San Fernando Valley, gas, drilling, and oil wells have disproportionately affected the health of our working-class neighborhoods,” Martinez said during the Jan. 26 meeting. “This is yet another example of how frontline communities bear the impacts of pollution and climate change, whether it’s a power plant, freeways, or an airport.”

There are 26 oil and gas fields and more than 5,000 oil and gas wells in the city, according to the Department of City Planning.

Councilman Joe Buscaino said before the meeting that the wells particularly disrupt life for residents in his District 15—particularly in the Wilmington area.

“To say that the issue before us hits close to home for my district would be a serious understatement, colleagues,” Buscaino said. “My district … had the highest concentration of oil and gas wells in the city, with nearly 400 active well sites. In my district, we’re at home to over 55 percent of the active sites citywide … you can imagine the disruption that this would cause on a daily basis.”

Some Angelenos, particularly Wilmington residents, have advocated for the ban of oil wells near residential neighborhoods.

One resident, who gave her name as Wendy, called into the city council meeting, saying her Wilmington neighborhood was heavily impacted by the oil wells.

Wendy said she lived about a mile from the nearest active oil well and that she, as well as her family members and neighbors, developed asthma, headaches, nosebleeds, and more because of the wells.

“I grew up watching [my mother] using her nebulizer every night just so she can breathe properly,” Wendy said. “We as frontline residents cannot wait any longer. Our health and our communities are not disposable.”

Another Wilmington resident, Ashley Hernandez, spoke alongside Martinez, Krekorian, and other LA officials at a news conference outside City Hall on Jan. 26.

Hernandez, a youth organizer for environmental organization STAND–LA, said she and her community have experienced everything from nosebleeds to eye infections, and she has even seen some of her teachers fall sick due to pollution from the nearby wells.

“I’ve lived in the front lines of neighborhood oil drilling my entire life and can’t begin to express what I’m feeling inside being here in this moment after all of the years of work front-line residents, partners, and allies have fought for,” Hernandez said.

Not all Angelenos approve of the city’s efforts to move away from fossil energy, however.

California Independent Petroleum Association has opposed the city’s efforts to ban oil wells for years. In 2019, its CEO sent a letter to Martinez expressing concern for the thousands who will lose their jobs if the city bans oil wells.

“Increased setbacks and additional restrictions … will devastate the vitality of the city of Los Angeles,” the letter reads, and argues that the ban on oil wells would eliminate thousands of jobs, lose tens of millions of dollars in local tax revenues, raise the cost of living for Angelenos, and threaten the economy and the livelihoods of residents by increasing dependence on unreliable foreign sources of oil.

In anticipation of displaced oil and gas workers, the motion instructs the city’s Economic and Workforce Development Department to prepare a report on the job impacts associated with the ordinance prohibiting oil and gas extraction.

During the meeting, Martinez also called for a new office of job quality stabilization “to ensure our workers are able to transition into a new clean energy economy while retaining their wages and benefits.”

The Los Angeles motion reflects a larger movement away from oil and gas drilling by nearby counties, as well as the state.

Last year, the Los Angeles County Board of Supervisors banned new oil and gas wells and voted to phase out existing wells in unincorporated areas.

Newsom has also called to phase out oil wells in the state by 2045.