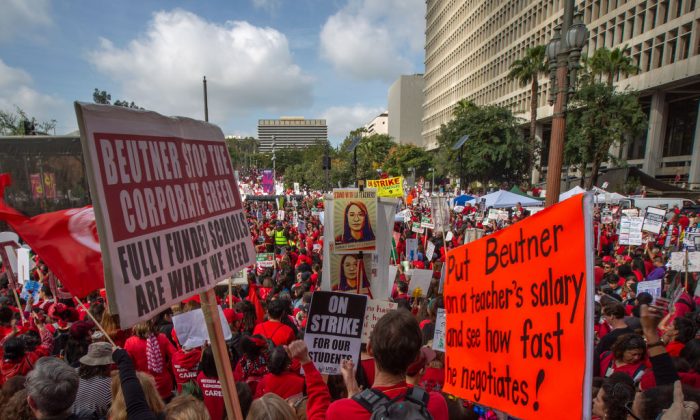 Los Angeles teachers returned to the negotiating table on Jan. 21 for the fifth day of contract negotiations with the country’s second-largest school district in an effort to end a strike that has disrupted classes for some 500,000 students.

More than 30,000 teachers walked off the job a week ago in their first strike against the Los Angeles Unified School District in three decades, demanding higher pay, smaller class sizes and the hiring of more support staff.

The talks were being mediated by Mayor Eric Garcetti’s office, which does not have oversight of the schools. The talks continued overnight on Sunday and resumed again on Monday morning, Garcetti’s office said in a statement.

District Superintendent Austin Beutner has said there is not enough money to meet the teachers’ demands without additional state funding. He said last week he would continue to keep all of the district’s 1,200 schools open this week on a limited basis if a deal were not reached.

The strike has already cost the district about $125 million—education funding in California is based on daily attendance—and collectively cost students more than 1.5 million days of instruction, according to Beutner.

The union says disagreements over proposals to reduce class size pose the biggest stumbling block to a settlement.

Another major point of contention has been the union’s call for curbing the steady expansion of independently managed charter schools, which it says divert resources from traditional classroom instruction.

Several possible contenders for the 2020 Democratic presidential nomination, including Garcetti, have voiced solidarity with the strike. Support also was running high among parents and the public, a recent survey of Los Angeles residents showed.