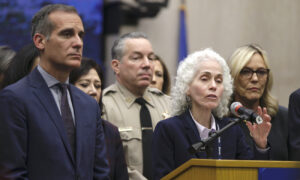 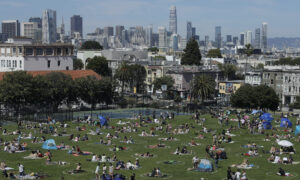 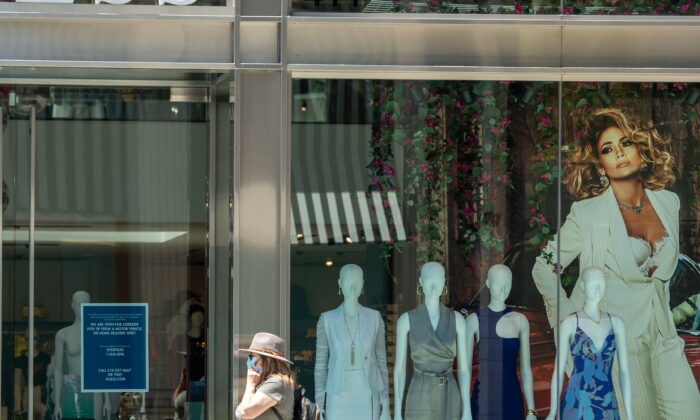 A woman wearing a mask walks by a Guess Store in Beverly Hills, Calif., on May 26, 2020 (Valerie Macon/AFP via Getty Images)
Southern California

Los Angeles is reopening for in-person shopping on Wednesday after a months-long lockdown imposed in a bid to slow the spread of the CCP (Chinese Communist Party) virus.

Retailers across the state were allowed to reopen in recent weeks and the easing will align the city with those guidelines.

Houses of worship can also reopen with capacity limits of 25 percent occupancy or no more than 100 people, whichever is less.

Residents were told two weeks ago that Democrat Mayor Eric Garcetti’s altered stay-at-home order would remain in place for three months, though some restrictions, officials said, would gradually be relaxed or removed.

Garcetti in a press conference Tuesday cited Democrat Gov. Gavin Newsom’s new guidelines for in-person shopping and religious services, issued after warnings from the Department of Justice to state and city officials.

“The sooner that stores can safely welcome customers inside to shop, the more we’ll see our stratospheric unemployment—that some estimate is higher than during the Great Depression here in Los Angeles—that we can finally see that begin to come down.”

Retailers had only been open for curbside and pickup.

Los Angeles, the second-largest city in the United States with some 4 million residents, is part of a county that’s seen over 47,000 CCP virus cases and nearly 2,000 deaths linked to COVID-19, the disease the virus causes. The city has recorded 22,567 cases and 1,051 deaths.

COVID-19 primarily causes severe illness in the elderly and otherwise infirm and kills a small percentage of patients.

A 15-page document (pdf) from county officials informs store owners of practices they’ll have to follow to reopen, including changes to keep people six feet apart and installing physical barriers when that’s not possible.

If reopening isn’t done correctly, retailers will be shut down again, Garcetti warned.

Hair salons and barbershops are remaining shuttered in Los Angeles, even as they open in 47 of the state’s 58 counties. Officials reached out to state workers to request approval for personal care services to resume operations. Other businesses remaining closed include bowling alleys, gyms, and museums.

Restaurants are also not expanding to dine-in service.

Gatherings of any size that include people from different households are still forbidden, with limited exceptions.

The L.A. County Board of Supervisors approved the reopening of in-person shopping at retailers.

“Every county around us has reopened,” Supervisor Kathryn Barger said earlier Tuesday, according to CBS Los Angeles. “If we do not begin to listen to our constituents and listen to what is going on in this county, we are going to have more jobs lost, because many businesses are not going to be able to reopen.”

Kathleen Teague, owner of Maison on Main Boutique in Newhall, told the broadcaster: “We’re ready to open our doors, we’re ready to have everybody just come in and get Main Street alive and rocking again.”