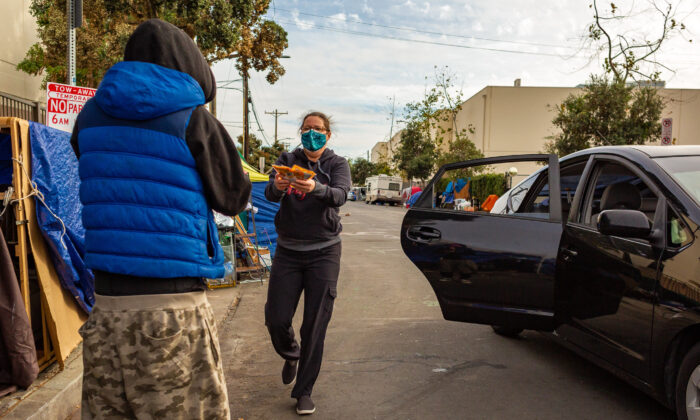 A woman hands items to a homeless man in the Venice neighborhood of Los Angeles on Jan. 27, 2021. (John Fredricks/The Epoch Times)
Southern California

Los Angeles officials recently announced two neighborhoods will soon have an unarmed response team to deal with nonviolent calls related to homelessness available 24/7 and accessible under 911 services beginning this month.

It’s the city’s most recent effort to show its voters action on the homeless crisis after a slew of motions were brought forth in recent weeks for additional housing and resources. Approximately 41,000 homeless individuals live on the streets in the city of Los Angeles and 66,000 across the entire county, according to the 2020 point-in-time count.

Venice and Hollywood are the designated zones for the Crisis and Incident Response through Community-Led Engagement (CIRCLE) pilot program, which will run through June 2022. The two areas were chosen due to their high call volume and homeless population.

The city will contract 48 outreach workers through Urban Alchemy, a San Francisco-based nonprofit addressing mental illness and drug addiction among the state’s most vulnerable population. The total cost for the six-month program is $30 million countywide and $2.2 million in the city. Outreach workers in CIRCLE will not be trained in any law enforcement tactics.

“We’ve been dealing with a pandemic—not just COVID-19 but a homeless pandemic,” Muhammad told The Epoch Times. His work involves mediating and providing prevention resources for gang activity, which sometimes overlaps with the 2,000 homeless people residing in Venice Beach.

“If it’s for intervention or prevention or outreach, then that is up to the community,” he said, adding that law enforcement should only be called when crime is occurring.

Councilmember Mike Bonin, whose district includes Venice Beach and most of West Los Angeles, said that “this is a big pivot for Los Angeles.”

“Cops should not be on the front lines dealing with homelessness,” he said.

Bonin was a vocal proponent of the local defund the police movement and has received backlash from some Venice residents who launched a recall effort against him over his handling of the homeless crisis.

The Los Angeles Police Department (LAPD) lost around $89 million in an effort to reallocate funds to anti-gang initiatives, homeless services, and other programs. In total, the LAPD receives about 140,000 calls pertaining to the homeless annually.

“There’s a lot of support around the idea of removing police officers from nonviolent response, and Los Angeles is harnessing that energy to create a model that strengthens the human bonds that are essential to public safety and seeks to help, not punish, our most vulnerable Angelenos,” Los Angeles Mayor Eric Garcetti said during a press conference on Nov. 23.

“We are never going to arrest our way out of this crisis,” Garcetti said.

However, some of those police officers have been involved with the homeless for decades. Deon Joseph, law enforcement consultant and 25-year veteran of the LAPD, told The Epoch Times he supports the CIRCLE program, but that “most of the officers are very well trained in how to deal with the mentally ill.”

“No matter how much training you have, there’s always the potential for it to go sideways because there are other variables involved,” Joseph said, pointing to drug addiction and prescribed medications.

“It’s really a problem when it’s narcotics related, when they’re dual diagnosed, because now when they’re in crisis, it becomes more of a challenge, because now you have a chemical buffer between you and the person in crisis, which is my only concern for this new movement.”

Joseph said most of the officers with 15 to 20 years of experience know how to diffuse threatening encounters with those who are mentally ill on the streets, especially in Skid Row.

“You’re on a first-name basis with individuals. So, you recognize when someone is about to go into crisis,” he said.

Joseph said that to this day, “we still get called out to help mental health clinicians to bring certain individuals into help or services,” because sometimes either their behavior patterns are unpredictable, or they become violent.

Meanwhile, some residents say they’ve encountered recent threats from homeless communities and are calling for more law enforcement, not less.

Venice resident and neighborhood community officer Soledad Ursua told The Epoch Times that removing the LAPD from the equation will place “unarmed civilians in some of our most dangerous and violent locations—ridden with open-air drug markets, gang activity, and human trafficking.”

Over the summer, the Los Angeles Sheriff’s Department (LASD) deployed its Homeless Outreach Services Team (HOST) to clean up the Venice Boardwalk, which saw an uptick in crime and encampment fires. The move was the center of heated debate over whether law enforcement should be involved in homeless outreach.

Lt. Geff Deedrick, who oversees HOST, told The Epoch Times the new unarmed program won’t impact the work they’re doing since the program is citywide and LASD deals with countywide efforts. HOST is deployed in encampment zones per the direction of Sheriff Alex Villanueva.

“Because of our experience and training, with the crisis stabilization … no average provider provides the training like we do, it doesn’t exist. It’s a whole different ballgame,” Deedrick said.

In 2019, Deedrick’s team was called to intervene in an ongoing effort to clean up encampments in the Alameda Corridor, where 120 outreach workers were present for 18 months. He said within 90 days, the encampment was cleared with zero arrests, and 75 people were offered housing services. The reason? He said law enforcement officials create a “guardian mentality” when dealing with the homeless.

“They [outreach workers] were good people, but there was no safety and security. It was chaos,” Deedrick said.

In a rare incident in 2020, an outreach worker was killed by one of her clients who was on parole. Her body was later found in a Pasadena park. Deedrick said cases like that, though uncommon, are the reason HOST should be involved in all aspects of outreach.

“That story disappeared. It goes against the narrative, and she was a friend of ours,” Deedrick said.

Although generally optimistic about the program, Muhammad is wary of the efficacy of Los Angeles’s larger-budgeted outreach initiatives, compared to grassroots agencies such as his own that form intimate relationships with the homeless and those susceptible to gang activity. He said his foundation has been doing the work for decades, while larger, newer nonprofits receive the city’s contracts.

“The smaller agencies should be doing what we call intentional outreach, working with the agencies that [are] out there—that’s the missing link right now,” he said.

There are currently 435 interim-housing locations countywide with 11,499 beds available, according to the Los Angeles County Homelessness and Housing Map.

Across the city and county, homelessness services are difficult to track due to bureaucratic loops; many of the agencies don’t communicate across jurisdictions. The city council’s homeless and poverty committee voted to track the data on its newest CARE-plus teams recently, which will be the sanitation department’s newest outreach addition to encampment cleanups.

Garcetti’s budget for the 2021–2022 fiscal year includes a $1 billion commitment for other forms of public safety as the council vowed to downsize the LAPD. Contracts for additional supportive housing developments have also been passed in an effort to supplement Proposition HHH’s limited success. The $1.2 billion taxpayer proposition, passed in 2016, was slated to build 10,000 supportive housing units. Almost six years after it passed, Los Angeles Controller Ron Galperin found only 489 of the bond-funded units were ready for occupancy in March.

The council also vowed to reallocate Prop. HHH funding to lower-development interim housing options, such as tiny home villages and additional rehabilitation services. There’s been minimal breakdown of where costs will be allocated.

As someone who once was involved in gang activity at a young age, Muhammad understands the complexity of homelessness and has been a vocal critic of the state’s Housing First model, which argues the way out of homelessness is to build more permanent supportive housing units.

“When I started looking at this homeless issue a couple of years ago, I was listening to it based on what the so-called experts were saying, that it’s a housing issue,” Muhammad said. “However, when I really looked at it, I said, this is deeper than housing … and when I get to the root of it as a recovering addict, I say, ‘You know what? This is all about addiction.’”