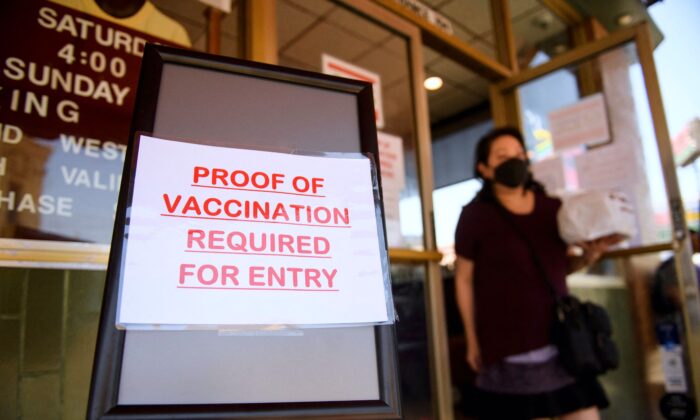 A sign stating proof of a Covid-19 vaccination is required is displayed outside of Langer's Deli in Los Angeles, California on Aug. 7, 2021. (Patrick T. Fallon/AFP via Getty Images)
Southern California

The Los Angeles City Council voted March 30 to lift its mandate requiring those ages 12 and up to show proof of COVID-19 vaccination before entering indoor businesses.

The mandate, which was enacted in November amid the surge of the Omicron variant, also required people to show proof of vaccination or a negative COVID-19 test to attend outdoor events with 5,000 or more people.

The motion included an urgency clause, which means it will go into effect as soon as it is signed by the mayor and published by the city clerk, though it is not immediately clear when the mayor will sign the ordinance, according to a spokesperson for Council President Nury Martinez, who introduced the motion March 9.

During a council meeting last week, Bonin said he was against lifting the mandate because of a new Omicron sub-variant, called BA.2.

“I know it feels like we’re out of the woods. It feels like we’re all going back to normal. But there’s new variants and new strains all the time,” he said. “This BA.2 [variant] is spreading, and we really don’t know what the variant a month from now, or two months, are.”

Angelenos, however, signaled that they were ready for the vaccine mandates to be over for good in submitted public comments.

“Council members, it’s time Los Angeles dropped the vaccine check,” resident Mariett Bennington said in a written comment to the council. “It’s clear that [everyone who] wants to be protected by the vaccine has chosen to receive it … everyone has access to it. Let people choose.”

Los Angeles resident Donna Baker commented that the vaccine requirement was hurting small businesses in the city and that people’s “god-given rights” to choose should be respected.

Baker urged the council to “stand for freedom” and “follow the science and move on.”

There was no public commenter against removing the indoor vaccine requirement at last week’s meeting.

Under the mandate, businesses that violated the vaccine mandate by not checking vaccination status were to be fined, with total amounts increasing for each violation.

However, a spokesperson for the city’s Department of Building and Safety told The Epoch Times it sent notices of violation to just six businesses, and no fines or citations were issued.

Though the mandate is lifted, businesses can still voluntarily require proof of vaccination, and COVID-19 vaccine verification or a negative test is still required by the city for healthcare facility employees.