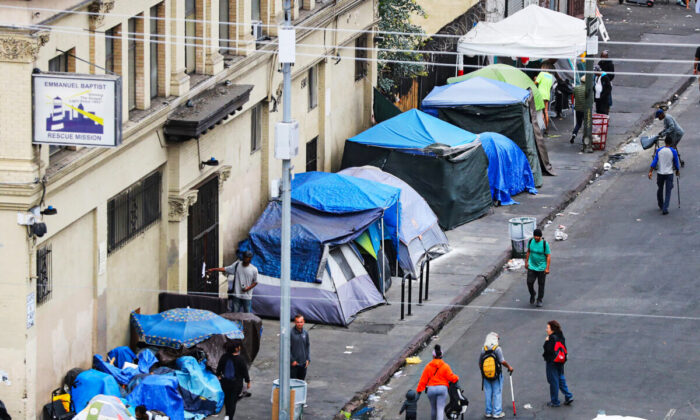 LOS ANGELES—The Los Angeles County Board of Supervisors is throwing its support behind Gov. Gavin Newsom’s Community Assistance, Recovery, and Empowerment (CARE) Court proposal unveiled earlier this month, which aims to force some individuals suffering from substance abuse, mental illnesses, and homelessness into treatment and housing through a court-ordered mandate.

The county board passed a motion and sent a letter to the state to support the CARE Court proposal earlier this week, although it’s unclear when Newsom will receive legislative backing for it.

Through the CARE Court, people could petition on behalf of someone with a severe mental illness or addiction for them to get treatments before they lapse into criminal activities or homelessness due to their conditions, which the motion said to be aligned with the county’s overall Care First, Jails Last initiative.

“Los Angeles County stands to benefit greatly from the rollout of the CARE Court,” the county board’s March 15 motion states.

People with severe mental illness or substance use disorders often end up on the streets, in jails, or in hospitals with “ailments that have been exacerbated by neglect,” and these outcomes do not provide the care and treatment they need, according to the motion.

The CARE Court offers more of a preventative approach, similar to current homeless court program initiatives in Long Beach, Redondo Beach, and Torrance, “in that it uses the courts to compel treatment and care, but it differs in that it does not require a criminal charge or arrest for an individual to qualify,” the motion states.

Under this policy framework, such individual who declines treatment could be placed into a conservatorship—a controversial system the American Civil Liberties Union (ACLU) denounced upon Newsom’s proposal of the CARE Court.

Details of the program are also limited at this time, but the governor said he’d be participating in roundtable discussions with criminal justice reform groups in the coming months.

“I’m sure many of my colleagues have questions about how this program was going to be implemented and funded,” Supervisor Janice Hahn said on March 15. “This motion also directs our county departments like our Department of Mental Health, our office of diversion and reentry, and our public defender to collaborate with the state to help design the program because it’s important that we have a seat at the table.”

If the proposal becomes law, every county in California has to comply with it.

Supervisor Sheila Kuehl supported the board’s motion to support the governor’s proposal, but said she is concerned that “counties cannot opt-in or, frankly, out.”

“It will be imposed on us to do this, and the original concept was within your own money,” Kuehl said.

She added that another downside “might be where we’ve seen judges just decide how the county should spend money.”

For local homeless service providers in Los Angeles, the move is a sign that Newsom is turning his ear to the root cause of homelessness that they say the current “Housing First” model doesn’t currently address.

“It’s all about housing, and housing is a big component, but without services, you put a person that’s addicted to crystal meth, fentanyl everything, heroin, whatever the case may be, and you say, ‘Hey, we’re going to put you in a hotel,’” Brian Ulf, SHARED! Housing co-founder and member on the LAPD Community Advisory Board, told The Epoch Times.

Ulf said the current temporary housing programs follow a “harm reduction model, … which means nobody has to use the service.” Also, he said, 70 percent of the individuals placed in hotels still have addiction issues.

Stan Mohammed, a co-founder of the Venice-based gang prevention nonprofit HELPER Foundation, told The Epoch Times “whether they get high inside the housing unit or out in the community, eventually they’re going to create a nuisance at the complex wherever they live in it.”

“So, again, I think the governor is speaking into the root of what’s causing folks to fall into homelessness in the first place. And the majority of it is addiction,” he said.

As a part of the motion, LA County officials will direct the county’s Sacramento legislative advocates to advocate in support of the CARE Court program.