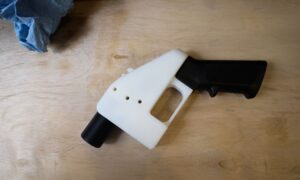 Los Angeles City councilmembers Aug. 3 introduced a motion to ban the purchase and possession of ghost guns in the city.

Ghost guns, also known as kit guns, are sold as partially assembled guns that can be completed using purchased parts. The unfinished parts are not legally required to have serial numbers or a background check to purchase and are often sold at gun shows or online.

Councilmembers Paul Koretz and Paul Krekorian requested an ordinance banning the possession, purchase, sale, receipt and transportation of all frames, receivers and firearms that are unfinished and non-serialized in the city.

Koretz said in a statement that shootings and homicides have increased 30 percent since the start of the COVID-19 pandemic. Shootings are up 43 percent, he said, with over 40 percent of guns confiscated by the ATF and a third of crime guns recovered by the LAPD in Los Angeles were ghost guns last year.

“With such staggering numbers and the sharp increase in hate crimes, we cannot turn a blind eye on a backdoor that allows criminals to gain access to firearms when they would otherwise be denied through the front door,” Koretz said.

Krekorian said in the statement that ghost guns are deliberately designed to avoid tracing.

“When sold without background checks, end up in the possession of felons,” Krekorian said. “In Los Angeles, ghost guns were a factor in the sharp rise in homicides in 2020. This motion enables the city to move aggressively to significantly reduce the number of non-serialized firearms in our communities.”

This comes as two Los Angeles County sheriff’s deputies this week filed a lawsuit against manufacturer Polymer80, who allegedly built and sold parts of a “ghost gun” used to ambush and injure the two deputies in September 2020.

Deputies Claudia Apolinar and Emmanuel Perez claim in their lawsuit they were both shot in the head and in the arms near Compton by an “unserialized Polymer80 firearm” purchased as a kit from either Polymer80 or one of Polymer80’s third-party distributors, who they claim acted “illegally and negligently” by selling it without performing a background check.

Neither Apolinar nor Perez have been able to return to work, according to the lawsuit.

Suspect Deonte Lee Murray was arrested three days later and charged with two counts each of attempted murder of a peace officer, and possession of a firearm by a felon in connection. According to the Los Angeles County District Attorney’s Office, he pleaded not guilty to all charges.

Murray was also charged on Sept. 17 with one felony count each of carjacking, second-degree robbery and assault with a semiautomatic firearm-personal use of a firearm. According to authorities, Murray could not legally buy or possess a gun because of his previous convictions.

Ghost guns were used in several mass shootings in the past decade, including the 2013 Santa Monica College shooting, the 2017 Tehama County shooting, and the 2019 Saugus High School shooting.