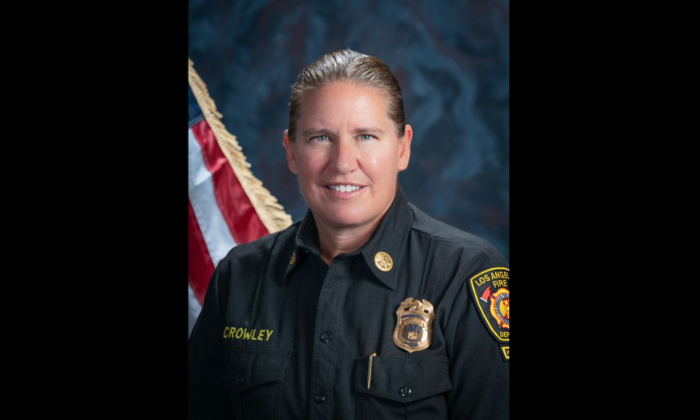 The Los Angeles Fire Department’s (LAFD) new chief Kristin Crowley, who was sworn into the position last month, will have an annual base salary of about $367,000—nearly 8 percent higher than her predecessor.

Crowley’s annual salary is about $27,000 higher than Terrazas’s, according to Transparent California, which researches and publishes salaries for California public officials.

Crowley could also additionally see up to $200,000 more in pay, with overtime pay, benefits, and via her retirement pension.

The new chief’s salary will be higher than that of the largest and second-largest fire departments in the country.

James C. Hodgens, the acting fire chief of the nation’s largest fire department, the New York City Fire Department, received a base salary of about $348,000 in 2020.

Annette M. Nance-Holt, fire chief of the Chicago Fire Department—the second-largest in the nation, received about $230,000 in 2021.

However, according to a report by LA’s City Administrative Officer, Crowley’s salary is within its recommended range for a general manager of a department—which is about $224,000 to $398,000.

LA Police Department Chief Michel Moore was paid a base salary of $377,000 in 2020, according to Transparent California.

Chiefs of other large California fire departments—such as Orange County, San Diego, and Sacramento—are currently paid a base between $200,000 and $300,000 annually.

During her tenure with the LAFD, Crowley has served as a firefighter, paramedic, engineer, fire inspector, captain, battalion chief, assistant chief, deputy chief, and chief deputy.

She is the first woman and the first openly gay chief to lead the LAFD.