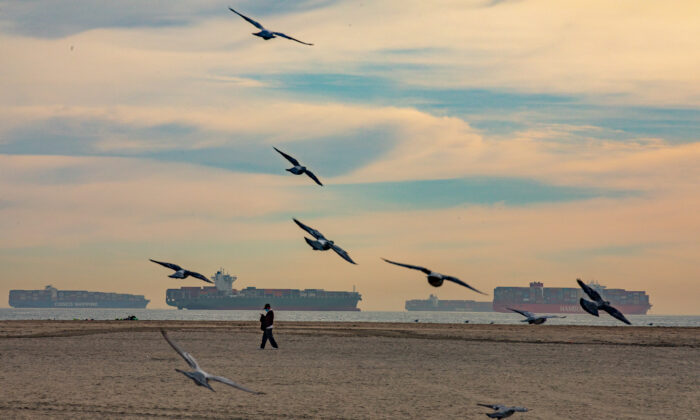 Ships line the horizon seen from Seal Beach, Calif., as they await to come ashore to the Port of Los Angeles, on Jan. 12, 2021. (John Fredricks/The Epoch Times)
Southern California

While the ports of Los Angeles and Long Beach saw record amounts of cargo volume and a record number of container ships waiting to unload in September, the worst of the backlog may be over. However, the effects on the global supply chain are expected to remain for months.

“Fourteen container ships are scheduled to arrive over the next three days, which is three fewer than the ‘normal’ level of 17 … based on 2018/9 pre-COVID levels,” Louttit told The Epoch Times via email.

The twin ports saw about 412 vessels arriving during September, which was 32 more than expected. In September 2020, only 344 vessels arrived.

Due to the high number of vessels in the San Pedro Bay waiting to unload their cargo, some of these ships are drifting more than 20 miles away from port.

Salvatore Mercogliano, an associate professor of history at Campbell University in North Carolina and adjunct professor at the U.S. Merchant Marine Academy, said that on average, the ships that are waiting to unload are nine to 12 days away from berth.

“By the time they clear this logjam, it’s going be post-Christmas, post-New Year’s,” Mercogliano told The Epoch Times.

An exporter who had been loading and shipping at least three vessels per week from Los Angeles to Latin and Central America, said now he only has three ships every other week, a dramatic decrease for his busy company.

“We’re down 66 percent capacity all of a sudden, so now we can’t ship, every vessel is overbooked. It’s a snowball effect,” the owner told The Epoch Times.

The exporter said that the trucking company he usually uses had to send its drivers home, as his regular business was cut to a fraction.

He said exporters hoping to fill empty containers to ship overseas have canceled or are holding off on orders because they have no idea how long it will take to get their merchandise on the ships to other countries.

One of his clients had to pay for weeks of chassis fees and storage, which he said cost more than the ocean freight to take the two containers to their destination in Guatemala. The client had to place his workers on hold because they couldn’t move the merchandise in their Southern California warehouses.

“Pre-COVID it was fine; even during COVID we weren’t seeing this level of dysfunction,” he said.

Reasons for the Backlog

Mercogliano said there are a number of reasons for the current backlog at the Los Angeles and Long Beach ports.

First, the COVID-19 pandemic created disruptions in the supply chain, starting with factory shutdowns in China. Other disasters, such as the Suez Canal closing for six days and powerful typhoons hitting Asia, have also had an effect.

Next, demand for goods has increased in the United States and other places around the world as people have been spending more time at home and ordering items online.

The nature of shipping has also changed in recent years, with much larger container vessels being used. This reduced the cost of freight, allowing people to become accustomed to bringing goods from the other side of the world to their doorstep on demand.

“The larger ships, while they can carry more cargo, the infrastructure ashore wasn’t designed to take it. And so you have these much bigger ships dumping much larger numbers of cargo on the ground,” Mercogliano said. “The roads, the railways, the trucking can’t take it.”

Next, many shipping companies have merged with other large container companies, increasing the amount of traffic to Los Angeles and Long Beach.

“We’ve never seen this volume of ships in those ports,” Mercogliano said. “There’s only so many trained longshoremen, for example; there are only so many trained crane operators to work every available crane. Then you have cranes that typically are shut down for maintenance, which also impacts the situation.”

Meanwhile, the ports at Los Angeles and Long Beach are not as automated as many other ports around the world.

“Cargo is being loaded in terminals in East Asia that are working 24/7, whereas the receiving ports, at least on our end, are not. They are working two shifts in LA and Long Beach, and weekends are hit-and-miss depending on the port and the terminal,” Mercogliano said.

In a Sept. 17 statement, the ports of Long Beach and Los Angeles announced that they would expand the hours that trucks could pick up and return containers to try to help reduce congestion.

“We are in the midst of an historic surge in cargo, and our terminal operators and other supply chain partners are giving their all to keep it all moving,” said Port of Long Beach Executive Director Mario Cordero in a Sept. 21 statement. “We welcome this pilot project … as a first step toward extending gates to 24/7 operations, and we encourage our cargo owners and trucking partners to give this innovative program a try.”