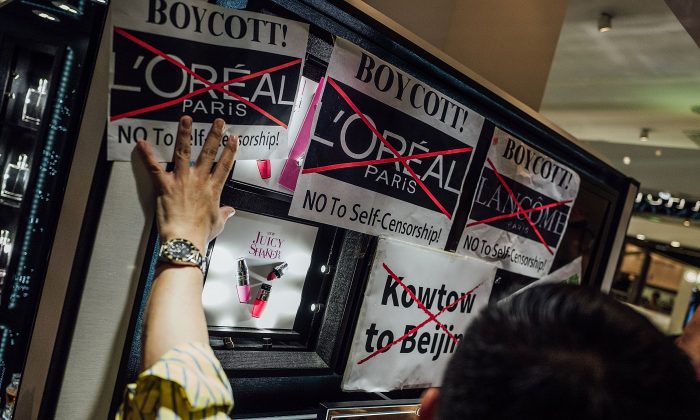 Protesters hold placards and shout slogans as they take part in a rally against French cosmetics brand Lancome at the store front of Lancome cosmetics in Causeway Bay, Hong Kong, on on June 8, 2016. (Anthony Kwan/Getty Images)
China

China was French cosmetics company L’Oréal’s second largest market in 2015. “In a country undergoing far-reaching and rapid change, L’Oréal is adapting and taking full advantage of the market’s transformations,” the company wrote in a financial report.

So when Global Times, the Chinese Communist Party’s provocative, nationalist tabloid, accused a popular Hong Kong singer and democracy supporter Denise Ho of advocating independence for the semi-autonomous regions of Hong Kong and Tibet, a company under L’Oréal, Lancôme, appeared to get the hint.

A called-off concert and a boycott later, L’Oréal’s shares took a nosedive—share prices had fallen by 2.068 percent at its steepest—and shows no sign of ceasing.

But L’Oréal could have avoided its current predicament had it known to ignore the egging of an aggressively patriotic, state-run rag.

Lancôme, an upscale perfume and cosmetics brand, canceled its June 19 concert in Hong Kong featuring Ho a day after the Global Times rant on June 4. In a terse statement on Facebook, the company cited “possible security reasons” for calling off the event. A version of the statement on Chinese social media was more forthcoming: “China’s Hong Kong region celebrity Denise Ho isn’t Lancôme’s spokesperson.”

That’s self-censorship, cried Ho, rights and democracy groups, and internet users in Hong Kong and China. “I am quite shocked that a global brand such as Lancôme … would succumb to the pressure from Chinese tabloid news or the Chinese market,” Ho said in a BBC interview.

On June 6, retired French philosophy teacher Beatrice Desgranges started an online petition to boycott Lancôme’s products. Two days later, Lancôme was forced to shutter its stores in Hong Kong’s luxury retail district as protesters censured its self-censorship and called for a boycott of all L’Oréal products.

The cries to snub L’Oréal appeared to be effective. Between June 7 to June 13, or about a week following the cancellation of Ho’s concert, L’Oréal had lost $4.68 billion in market value.

If Lancôme knew that the role of the Global Times was to inflame, and not inform, it wouldn’t have curtly disowned Denise Ho the Cantopop singer and endured immediate backlash.

In the microblog post on Sina Weibo that sparked the incident, Global Times had merely sought comments from Chinese netizens on Lancôme and mouthwash company Listerine’s decision to use Ho to front its publicity events since she was, in their words, “Hong Kong poison … Tibet poison.” In Chinese, the word “poison” and “independence” are homophones.

Although Ho had met with the Dalai Lama in May and belongs to Hong Kong’s pro-democracy camp, she hasn’t called for an independent Tibet, much less a sovereign Hong Kong.

And getting an accurate read of the Chinese people’s sentiments from the Global Times’ comments section is practically impossible, given the tabloid’s reputation for being overly nationalistic, and its tendency to attract a crowd prone to jingoism, always ready to go for the jugular of less “patriotic” persons.

In a nutshell, international companies should avoid mistaking the caustic jibes of the Global Times for an important missive from on high. A familiarity with the current political climate would also save many a multinational significant trouble.