Walmart Shortens Its Hours Over Coronavirus
0 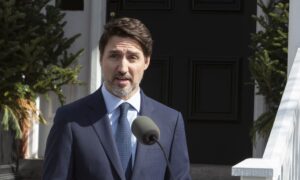 Return Home While You Can, Ottawa Tells Canadians as COVID 19 Continues to Spread
0 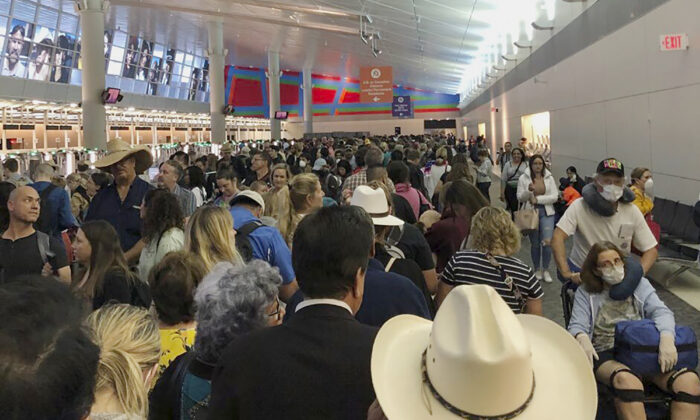 People wait in line to go through customs at Dallas Fort Worth International Airport in Grapevine, Texas, on March 14, 2020. (Austin Boschen via AP)
US News

Americans returning to the United States from abroad are seeing long lines and hours-long wait times for medical screenings at airports, as stricter travel restrictions are being implemented over the novel coronavirus.

Over the past few days, President Donald Trump declared a national emergency and a travel ban on travelers from Europe, most recently extending the ban to Britain and Ireland on March 14, which were previously exempt. Foreign nationals who have visited countries such as China, Iran, and certain European countries are blocked from entering the United States.

In an acknowledgment of the lengthy wait times, the Department of Homeland Security’s (DHS) acting Secretary Chad Wolf said the department is working on increasing the scope of screenings. In some places, including Chicago’s O’Hare International Airport, some passengers waited for over four hours.

“DHS is aware of the long lines for passengers who are undergoing increased medical screening requirements,” Wolf said on Twitter on March 15. “Right now, we are working to add additional screening capacity and working with the airlines to expedite the process.”

Wolf said he understood that the situation was “very stressful” for passengers. The World Health Organization (WHO), after resisting for weeks making the declaration, announced on March 11 that the spread of the virus was a global pandemic.

“In these unprecedented times, we ask for your patience,” Wolf said. “It currently takes ~60 seconds for medical professionals to screen each passenger. We will be increasing capacity but the health and safety of the American public is first & foremost.”

“Pardon the interruptions and delays, we are moving as quickly as possible, but it is very important that we be vigilant and careful,” he said. “We must get it right. Safety first!”

“We ask for your patience as CBP/CDC agents are conducting enhanced screening for passengers, which may cause additional delays,” the airport said on March 14. “These measures are important for the health and safety of all.”

Meanwhile, some airlines are reducing the number of flights. American Airlines announced on March 14 that it will “reduce international capacity by 75% year over year” from March 16 to May 6. It will suspend most international flights to Asia, Australia, New Zealand, Europe, and South America.

“This change is in response to decreased demand and changes to U.S. government travel restrictions due to coronavirus,” the airline said in a release.

On March 14, the Trump administration said it wanted Congress to financially support the U.S. airlines negatively hit by the virus. United Airlines said March 14 that it would begin cutting flights to the United Kingdom. Southwest Airlines moved toward flight cuts, and Delta Air Lines plans to start cutting flights to the UK, according to Reuters.

Canada is one of the few countries that has not banned foreigners from entering.

For most people, the virus causes only mild or moderate symptoms, such as fever and cough. For some, especially older adults and people with existing health problems, it can cause more severe illness, including pneumonia.

The vast majority of people recover. People with mild illness recover in about two weeks, while those with more severe illness may take three to six weeks to recover, according to WHO.

Travelers from restricted countries in Europe, China, and Iran are advised to self-quarantine for 14 days after reaching their final destination in the United States. The virus first emerged in the central Chinese city of Wuhan in December 2019.