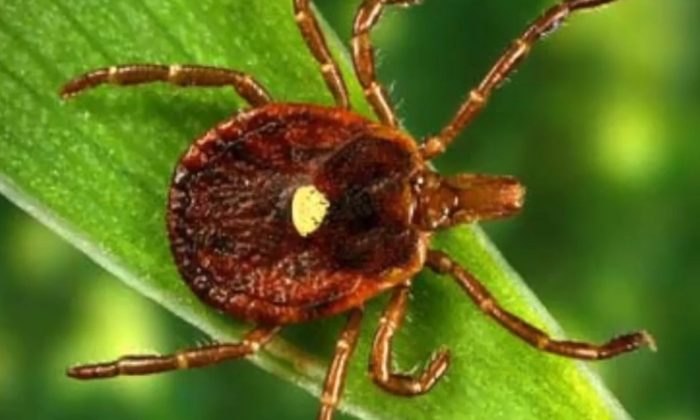 The Heartland virus is spread by the lone star tick. (AOL/Screenshot via The Epoch Times)
US News

Lone star ticks carrying a virus that could potentially prove fatal to humans have been discovered in Georgia, a new study reported Wednesday.

The Heartland virus is an emerging infectious disease that can cause symptoms such as fever, diarrhea, fatigue, muscle or joint pain, headache, nausea, and a loss of appetite, according to the Centers for Disease Control and Prevention (CDC).

Many individuals who have been diagnosed with the Heartland virus have had to be hospitalized due to their symptoms and some who had underlying health conditions have died.

There are currently no vaccines or medications that work to prevent or treat infection of the virus and antibiotics do not work.

Scientists from Emory University who are researching the Heartland virus said they have discovered it is circulating in lone star ticks in central Georgia, providing new evidence as to how the tick-borne virus may evolve and spread geographically and from one organism to another.

Lone star ticks, also known as Amblyomma americanum, are the most common tick in the state and are mostly found in woodlands with dense undergrowth.

They are named after their unique appearance—a female lone tick has a silvery-white, star-shaped spot on the center of its back.

Scientists at Emory University sampled nearly 10,000 juvenile and adult lone star ticks across the state between 2018 and 2019 and found the virus was prevalent among the population.

The ticks were collected from sites in Georgia’s Putnam and Jones counties and separated into groups, each containing either five adults or 25 nymphs, then crushed and placed into a solution to test if they were carrying the virus.

Their findings indicate that roughly one out of every 2,000 of the specimens collected from the areas carried the Heartland virus and confirm active transmission within the state.

One adult and one nymph sample, both of which were collected on the same date, tested positive from a site in Putnam County, which is used for hunting. Another sample of adult ticks, collected on a different date from a stretch of woods along a highway in Jones County, also tested positive.

The research was published in the journal Emerging Infectious Diseases, a CDC publication.

“Heartland is an emerging infectious disease that is not well understood,” said Gonzalo Vazquez-Prokopec, a leading expert in vector-borne diseases, associate professor in Emory’s Department of Environmental Sciences, and senior author of the study.

“We’re trying to get ahead of this virus by learning everything that we can about it before it potentially becomes a bigger problem.”

Genetic analysis of the viral samples showed that their genomes are similar to one another, but very different from the genomes of Heartland virus samples from outside of Georgia.

“These results suggest that the virus may be evolving very rapidly in different geographic locations, or that it may be circulating primarily in isolated areas and not dispersing quickly between those areas,” Vazquez-Prokopec said.

Scientists now plan to collect ticks from across Georgia and conduct further tests to better understand factors that may raise the risk for Heartland virus.

“We want to start filling in the huge gaps in knowledge of the transmission cycle for Heartland virus,” Vazquez-Prokopec added. “We need to better understand the key actors that transmit the virus and any environmental factors that may help it to persist within different habitats.”

The Heartland virus was first discovered in two men in northwest Missouri in 2009 who were both hospitalized with high fevers, diarrhea, muscle pains, low counts of white blood cells and platelets, as well as other symptoms related to tick-borne diseases.

As of January 2021, more than 50 cases of the disease caused by the virus have been reported across the states of Arkansas, Georgia, Illinois, Indiana, Iowa, Kansas, Kentucky, Missouri, North Carolina, Oklahoma, and Tennessee, according to the CDC, which noted that the majority of those diagnosed with the disease became ill between May and September.

Researchers noted that there has been a single confirmed human infection of Heartland virus in a Baldwin County, Georgia resident who died in 2015 of what was then an unidentified illness but later discovered to be the infection after a retroactive analysis.

While little is known about the Heartland virus, the infection rate remains relatively low, and Vazquez-Prokopec said researchers don’t want to create panic but rather raise awareness of the disease.

“There is no reason to panic,” he told Newsweek. “Our goal with the study was to describe an emerging infectious disease for which we know very little. The main point for people in Georgia and anywhere where the lone star tick lives is that we are entering the spring. Ticks are very active and we show that there is a risk of ticks biting people and Heartland being transmitted. The lone star tick is the tick that bites most people in the South. As people venture out recreationally, we have to remind them about the importance of preventing tick bites.”