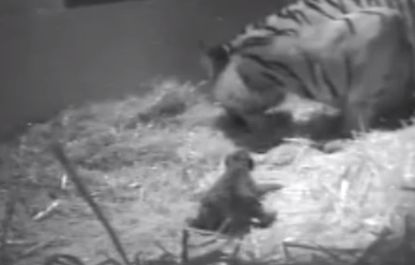 Sumatran tiger Melati and her cub in footage taken before the cub drowned on, which was confirmed on Oct. 13, 2013. (Screenshot/YouTube)
UK

The London Zoo is mourning the loss of its first tiger cub in 17 years, born to a five-year-old Sumatran tiger named Melati.

The cub was only three weeks old when it drowned n a pool in its enclosure. The zookeepers realized the cub was missing on Saturday.

Melati is a nervous tiger, and the zoo had tried to keep her at ease by maintaining her routine and allowing her full access to her enclosure as usual so she would not react by possibly hurting the cub, reports CNN. It seems Melati carried the cub to the paddock area of the enclosure where it fell in the pool.

“The keepers are naturally very distraught,” a London Zoo spokeswoman told Channel 4 News. “They work very closely with the tigers, so it is incredibly sad news for them.”

Earlier ‘Cub Cam’ Footage of Melati and Her Cub