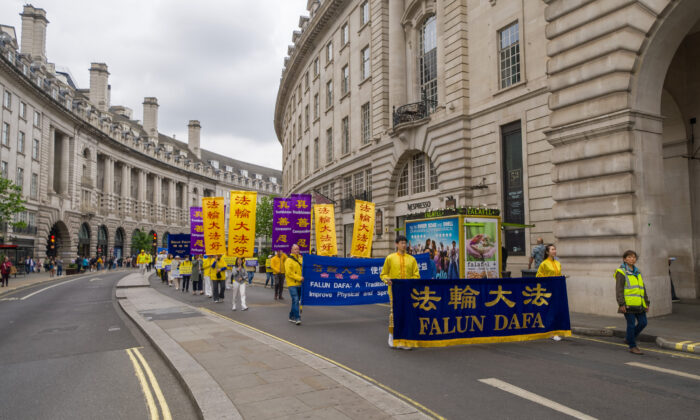 A parade in celebration of World Falun Dafa Day passes through the streets of central London on May 7, 2022. (Yan Ning/Epoch Times)
UK

Falun Dafa, a practice of meditative exercises with an emphasis on moral character, was first introduced to the public in China 30 years ago on May 13. That date has since been adopted by its practitioners as “Falun Dafa Day,” with celebrations held on or near that date. Falun Dafa is also known as Falun Gong.

The wording on the banners in the London parade highlighted the practice’s guiding principles: truthfulness, compassion, and tolerance.

“Falun Gong has been a great gift to myself and to other practitioners,” Rosemary Byfield, a spokesperson for the UK Falun Dafa Association, told The Epoch Times after the parade. “It’s given us good health, peace of mind, and a sense of renewal of our lives. And I think Falun Gong gives us great hope.”

Byfield, however, noted there was another, tragic, theme to the parade: persecution.

Following that first introduction to the public on May 13, 1992, Falun Dafa gained an estimated 70–100 million followers within just a few years.

Paranoid about the number of adherents, and believing Falun Gong was a threat to its atheist ideology, in July 1999 the Chinese Communist Party under the leadership of Jiang Zemin launched a large-scale persecution with the aim of crushing Falun Gong.

Inside China, overnight 100 million people became enemies of the state as tens of thousands began to be shipped off to detention centres and labour camps.

Meanwhile those people who practised Falun Gong outside China began to devote their energy and spare time to exposing what was unfolding in China, said Byfield.

The UK was typical.

“Practitioners go out in their cities around the UK, to demonstrate the exercises, distribute leaflets, talk to people about what Falun Gong is, because since the persecution started, the CCP media spread a lot of damaging misinformation about Falun Gong, and people didn’t know what Falun Gong was,” said Byfield.

“And they also started petitions, petitions to help persecuted practitioners in China, and they got excellent results.”

She said those petitions and appeals have helped secure the release of family members in China.

“They were released because of the impact of kindhearted people supporting these petitions. We would collect a lot of signatures and the local MP [of] the practitioner who had a family member in China persecuted would take action.”

Such appeals to help from the world of politics is the reason that the parade, which started outside the Chinese Embassy, ended opposite Downing Street, where the office and residence of the prime minister are located.

“Today, because it is the 30th anniversary of Falun Gong being introduced to the public, we have received many greetings and messages of support from MPs and members of the House of Lords,” said Byfield. “And they are affirming the principles of truthfulness, compassion, and tolerance as being good for humanity.”

Last month, Parliament passed legislation making it illegal for UK citizens to receive an organ transplant abroad without proper consent from the donor.

The law was the culmination of months of growing clamour from British lawmakers to push back against the practice of live organ harvesting by the Chinese Communist Party, in particular sourced from Falun Gong adherents.

In 2019 an independent people’s tribunal unanimously concluded that prisoners of conscience have been—and continue to be—killed in China for their organs “on a significant scale.” It noted that adherents of Falun Gong have been one of the main sources of organ supply.

The tribunal published a 160-page report on March 1, 2020, reaffirming its previous conclusion, stating that there was “no evidence of the practice having been stopped and the Tribunal is satisfied that it is continuing.”

Evidence of forced organ harvesting from Falun Gong practitioners only began to emerge in 2006, seven years after the persecution in China began.

As well as sending a message to lawmakers and the government, the practitioners outside Downing Street also had a message of thanks and birthday wishes to the founder of Falun Gong, Li Hongzhi.

As well as marking the anniversary of the spreading of the practice in China 30 years ago, May 13 also happens to be Li’s birthday.

Many of the more elderly practitioners said they wanted to express their thanks for dramatic health benefits from the practice.

Those who are younger tended to focus more on the mental and spiritual benefits.

“I used to be very shy, introverted, couldn’t express myself, couldn’t really speak properly,” said Natalia Nutting, a story telling coach. She said after practising Falun Dafa, she found what she described as “spiritual confidence.”

“I knew that I was on the right path, that I was following right principles,” she said. “Then suddenly, miraculously, I could express myself better. I could communicate with people. And for me that was miraculous.”